Lester Hughes, from Pwllheli, is a mature student and a father of two and has just started a PhD in Film. His short 12 minute film, Waves, Taid & Time, has been nominated in the Experimental category at the festival. The winners will be announced at the festival, in Llanelli, between the 8th-12th of April. 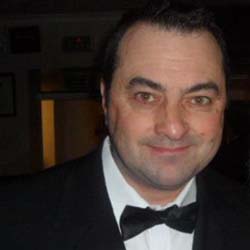 Lester HughesLester said: “The Carmarthen Bay Film Festival is a relatively new film festival and prides itself in encouraging and supporting independent film and cinema in Wales, the UK and Internationally.

“When I got the email telling me I was nominated, I wasn’t sure what to feel to be honest - partly excited, partly nervous and the thought of complete strangers sitting down in a darkened cinema to see something that I’ve created feels very surreal.

“It’s an experimental piece and it explores one man (a grandfather) as he recalls stories from his father and grandfather’s lives. Ultimately it examines the small insular lives we all seem to lead. It uses Bardsey Island as a metaphor, with it being a place that many people live within sight of but never actually take the time to explore.

“The film was made as part of my Master degree and is quite personal. It was inspired by my own grandfather who lived on the LLeyn peninsula all his life, overlooking Bardsey Island, but only ever went there when he was in his 60's.

“I have a lot of people within our department to thank for my nomination - from a production perspective having both Joanna Wright and Mikey Murray mentor me through the filmmaking process has been instrumental to my confidence. I also owe Huw Powell a debt of gratitude for his constant help and support. Between all three they have experience of working on documentaries, soaps, and BAFTA winning short films, and this rubs off on the students.”

About the School of Creative Studies and Media, Lester said: “It’s quite a small department, with a diverse range of students studying everything from the theory of film, performance, screenwriting, to filmmaking and journalism. Because it is a small department the students help each other out on productions both within the University and for their own little productions outside the school, this allows the students to put into practice what they have learnt on many different films throughout their time at the school.”

About studying at Bangor, he said: “I left home at 18 and went straight to work, where I had many diverse jobs from stacking shelves to running my own businesses. I am the oldest of 7 children and University simply wasn't an option for me when I left school. Twenty years on I got married and decided to apply for an undergraduate Film Studies degree. During the three years I juggled coursework, a part time nightshift job and a new baby, which wasn’t easy! Having graduated with a 2.1 I was offered a place on a Film MA course and I was also lucky enough to get a part time job within the department.

About the future, Lester added: “It’s a very exciting time to be at the School of Creative Studies and Media, when I started my undergraduate degree no one was making films but the department has gone from strength to strength, and students are regularly turning out quality films. This year’s postgraduate students have been exceptionally successful with wins at the Fresh festival and even a Royal Television Society award. I feel extremely lucky to work and study in the department at this time and I plan to chisel away at my PHD, carry on filming and enjoy this unique creative environment for as long as I can.”