Head of Performance Richard Craig recently premiered a new work with the RTÉ Symphony Orchestra, in the National Concert Hall on the 14th of February. The composer, Ann Cleare, was commissioned to write a work for contrabass flute and contrabass clarinet (played by the Carol McGonnell) and orchestra. Eyam V (woven) was recorded for broadcast, and will be aired on the 24th of March on RTÉ Nova. The Irish Times music critic Michael Dervan noted that:

"Eyam V blurs the lines between the two solo instruments and the orchestra in a similar way, though the general trajectory of the music, from the lowest depths to the highest reaches, ending with a flavour of the start, is at all times clear. And hearing such rare instruments in such expert hands was a pleasure in itself." 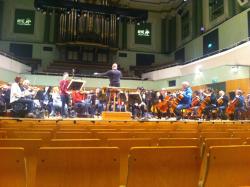 Richard Craig with the RTÉ Orchestra.