After years of relative stagnation, the study of medieval music theory is showing the signs of a vital renaissance. Ironically, it is the marginal status of this field which has reignited this interest: as the study of medieval theory moved from the centre of musicology towards its periphery, scholars have become increasingly aware of its close interconnections with other disciplines, discourses and modes of representing knowledge in medieval culture. 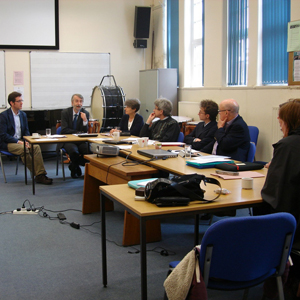 A fresh and manifold approach suffers from the hindrance that specialists are divided between different disciplines and lack a research infrastructure. In 2011 Dr Christian Thomas Leitmeir and Ms Elina Hamilton  made a first effort to solve this problem through an informal workshop at Bangor (July 2011). Building on the success of this meeting, this workshop could be repeated on an international scale in 2012. This was made possible thanks to generous funding from Institute of Medieval and Early Modern Studies (Aberystwyth–Bangor).

The organisers were delighted to welcome a small, but select group of specialists in medieval music theory, representing different ages, countries and areas of expertise.

After two intense days of stimulating papers and discussions, the workshop concluded to Conwy Castle on invitation from the Mayor and Councillors of Conwy.

Professor Elżbieta Witkowska-Zaremba (Warsaw, Academy of Sciences)
Musical past from the perspective of medieval theorists