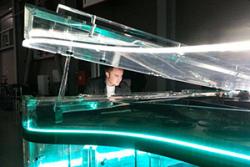 Owain LlwydA new work by a talented composer who orchestrated the music used in a trailer for the latest Hobbit movie blockbuster will be unveiled at a top music festival.

Owain Llwyd, 30, who's also composed for the X-Factor, Top Gear and Big Brother, is looking forward to the premiere at Bangor Music Festival, which starts on March 4.

He's "really excited" about the commission which he has written specifically for North Wales Camerata – an ensemble of more than 20 young musicians, under the direction of Patrick Rimes.

The concert will be at Capel Penrallt, Bangor on Saturday, March 7, at 7:30pm.

Owain, a Coleg Cymraeg Cenedlaethol lecturer at Bangor University's Music School said: “It’s quite a change from what I would normally compose. It’s based upon a traditional Welsh tune called Y Deryn Pur but in my piece you don’t hear the full melody until the last few bars. Before that the melody is stretched.

“The whole piece, which is in three movements, is quite a change for me as a composer.

"I wrote the first and last movements over Christmas and the work is quite spiritual. I think it happened subconsciously but I lost four or five good friends and acquaintances, all of whom had strong north Wales connections, during that time.

“The result is Gentle Dove which is a piece for strings and trumpet. The first and last movements are almost in a memorial style while the second movement is more joyful and celebrates life.”

Owain, who’s post is funded at Bangor University by the Coleg Cymraeg Cenedlaethol, which works with universities across Wales to develop Welsh language medium opportunities for students, says as soon as he heard North Wales Camerata play he knew he wanted to write something specifically with them in mind.

He said: “That’s why I was so delighted to be commissioned by the Bangor Music Festival. As soon as I saw the Camerata play I was excited about the prospect.

“Gentle Dove is a piece for strings and trumpet. Gwyn Owen will play the trumpet but all the musicians have connections to North Wales and all are studying at UK music colleges.

He then completed his PhD in composition writing music for film and TV at Bangor before becoming a Welsh-medium music lecturer under the auspices of the Coleg Cymraeg Cenedlaethol.

As well as lecturing in music at Bangor University and composing his own music, Owain is kept busy orchestrating the work of other composers.

He said: “I do a lot of orchestration work for the British composer Tom Player. Basically I notate the score for his music. Tom specialises in writing music for film trailers and TV adverts.

“It’s very common he will write the music and I score it up for the orchestra. Orchestration is an important part of the writing process. It has meant I have worked on some wonderful projects such as the last Hobbit film and TV adverts for companies such as Ikea.

“And I have also composed my own original music that has been included on such programmes as The X-Factor, Top Gear, the US Open, Masterchef and Big Brother to name just a few.”

The life and work of music legend Frank Zappa will be celebrated at the festival where fans can talk to his widow, Gail, via a live link from California.

The iconic American bandleader, songwriter, composer and film director will be remembered in a series of events.

The theme this year is ‘Crossover and Multimedia’ with each concert having a connected educational project that will involve a number of local schools as well as the city’s university students.

The Apollo Saxophone Quartet will open the festival with a concert of crossover music influenced by jazz and minimalism together with the quartet’s own scores to short silent films in Reichel, Ffriddoedd Road, Bangor.

The festival will close with the awarding of the William Mathias Composition Prize for a piece for flute, clarinet, piano and electronics during the Rees/Roche/Pestova evening concert on Sunday, March 8.

For more information on Bangor Music Festival and for ticket information visit www.bangormusicfestival.org.uk