Richard Craig, the recently appointed Head of Performance, has had a productive start to his first Semester

Richard Craig, the recently appointed Head of Performance, has had a productive start to his first Semester. As a specialist in co 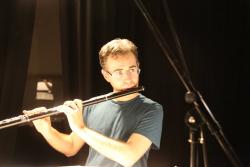 ntemporary music, he collaborates with composers integrating cutting-edge technology with his own research into contemporary performance practice. Since his appointment in October he has been to New York, where he premiered a new work written for him by the Harvard graduate Ann Cleare, as well as giving the US premiere of a new collaboration with the Welsh composer Richard Barrett. The tour closed with a teaching residency and concert at Lawrence University, Wisconsin. The residency at Lawrence University focussed on contemporary practice using live electronics.

In November, Richard gave a paper at the Gent Institute in Belgium which was part of the DARE 1st International Artistic Research Conference: a presentation on his study and performance of Brian Ferneyhough’s Unity Capsule. He has been invited back to the Orpheus Institute, to give another paper and performance in February. Other engagements in 2015 included a concert at Huddersfield Contemporary Music Festival (recorded by the BBC for broadcast at a later date) and performances in San Sebastian with the contemporary music ensemble SMASH.

The new year started with an equally productive period: Richard is one of the founding members of the ESTALAGEM Residency for Contemporary Music and Live 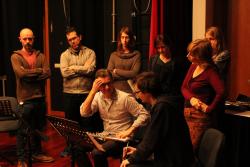 Richard teaching on the ESTALAGEM sa Ponta do sol Residency for Contemporary Music and ElectronicsElectronics, Madeira. As an invited Master Artist, alongside lecturers from Bangor and Goldsmiths University, he presented his recent research and was a mentor to early-career artists from the USA, Argentina, Chile, Holland and the UK. Lastly, Richard will be making the final touches to his 2nd solo disc with a view to releasing it this Summer. It will featuring new collaborations and premiere recordings of works by John Croft, Richard Barrett, Esaias Jarnegard, Brice Pauset and Fabrice Fitch.