Why being bilingual can open doors for children with developmental disabilities, not close them

This article by Eirini Sanoudaki Senior Lecturer in Linguistics (Bilingualism), and Rebecca Ward of Swansea University is republished  from The Conversation under a Creative Commons licence. Read the original here.

When parents learn their child has a developmental disability, they often have questions about what their child may or may not be able to do.

Children with developmental disabilities, such as Down syndrome, often have challenges and delays in language development. And for some families, one of these questions may be: “Will speaking two languages be detrimental to their development?”

However, studies consistently demonstrate exposure to an additional language, including a minority language, does not impact language outcomes negatively. This highlights the importance of giving children the opportunity to become bilingual.

Many parents feel speaking one language would be easier than two. Some may feel bilingualism would be too confusing for a child with a developmental disability. This is a belief which is also sometimes held by teachers and clinicians who may be consulted on their view towards bilingual exposure.

With good intentions, paediatricians, speech–language therapists, teachers or social workers may advise parents to avoid using a heritage or minority language in the home, as children will also be exposed to the majority community language.

Research also shows children with disabilities may have fewer opportunities to access services in a second language.

However, bilingualism is possible for children with developmental disabilities, as our research on children learning both Welsh and English shows. Children who are able to access bilingual provisions may also benefit. In fact, research shows bilingualism may have a positive impact on these children’s social interactions and the formation of their identity.

The most recent census data for England and Wales suggests the number of children able to speak Welsh in Wales has declined by 1.2 percentage points from 19% in 2011 to 17.8% in 2021. The largest decline was in those aged between 5 and 15 years old.

While these latest figures are unexpected and disappointing according to the Welsh government, the age group with the highest percentage of Welsh speakers was also children between the ages of 5 and 15. This gives a promising outlook for the future of the Welsh language.

Crucially, converging evidence shows bilingualism does not cause additional difficulties or lead to confusion for children learning more than one language.

Parents may have reservations about Welsh-medium education if they do not speak Welsh themselves, for example. Parents of autistic children or children with developmental disabilities may have further reservations still.

Once again though, studies show bilingualism does not cause additional difficulties for these groups either. This includes children with more complex and co-occuring conditions.

Why parents should embrace bilingualism

Meanwhile, the bilingual children were also developing skills in their additional language. Those also acquiring Welsh had similar abilities in that language as younger children without Down syndrome, who were at the same level of development.

Children with Down syndrome should therefore be supported in accessing similar educational provisions as more typically developing children. In the context of Wales, this could mean accessing Welsh-medium schools or being included in second language classes.

In Wales, parents can opt for their children to receive Welsh-medium education, regardless of their home language. Children who receive Welsh education can flourish if they have access to bilingual education.

Research on typically developing bilingual children and adults suggests there may be other benefits to being bilingual. These include better mental skills, creativity and even the possibility of being protected against cognitive decline, such as Alzheimer’s disease.

Being bilingual opens up a range of opportunities such as better prospects of gaining employment, and helping to develop social skills. 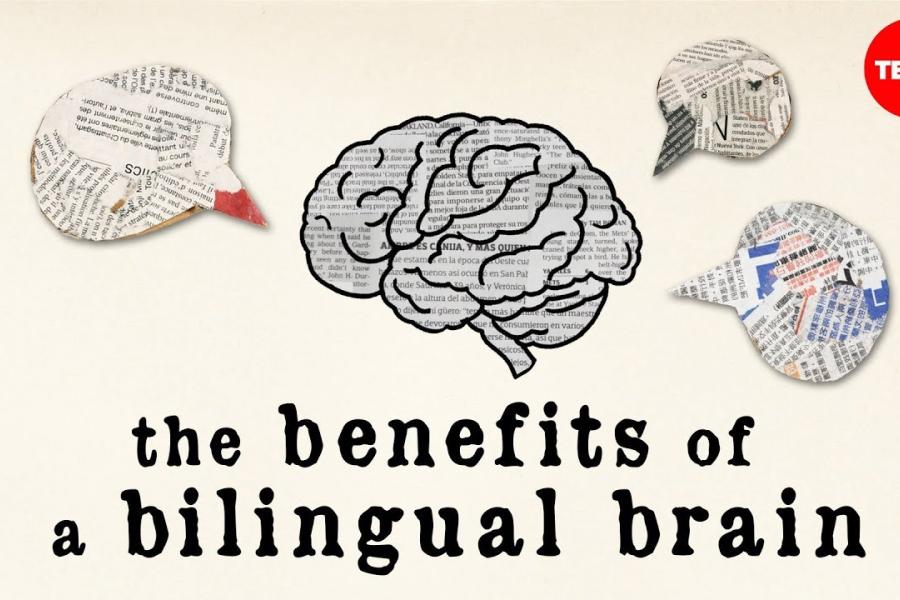 Video: News The benefits of a bilingual brain - Mia Nacamulli

Research shows some of these benefits, such as enhanced thinking skills, may also extend to autistic children.

Giving children the opportunity to develop abilities in two languages also enables them to be able to choose what language they want to communicate in. It may also make them feel connected to their community.

These findings challenge the view that bilingualism is detrimental to children’s development. In contrast, including children with developmental disabilities in bilingual provisions gives them the chance to blossom alongside their typically developing peers.

As a result, families should feel empowered to reach informed decisions for themselves by considering the potential opportunities being bilingual may provide.