UK scientists are rolling out an array of technology to understand if a charismatic seabird species will thrive or suffer under future climate change and extreme weather events.

The research, led by scientists from Bangor University, focuses on a national important colony of European shag (Gulosus aristotelis) on Puffin Island, near Anglesey. Numbers of European shags have been declining in recent years, putting them onto the red list of birds under the highest threat of extinction in the UK.

GPS trackers, accelerometers, miniature bird-borne cameras and time-lapse photography are some of the technologies being used by the team, which includes researchers from Lancaster University and the Universities of Liverpool and Cumbria.

The footage from the miniaturised cameras captures the birds diving for fish, providing data to help researchers understand how weather conditions may affect the foraging behaviour and success of a diving seabird species. The research is the first time this technology has been used on seabirds on Puffin Island.

The accelerometers – a kind of speedometer – record how fast the bird is moving and how it twists and turns in the sea in pursuit of prey. 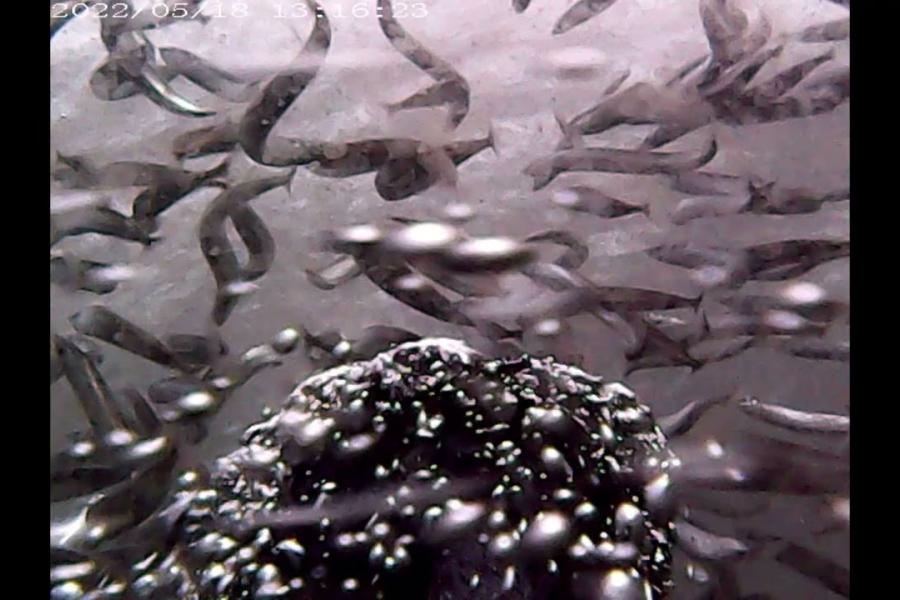 We piloted the technologies on European shags on Puffin Island this year and they worked really well, so we’re aiming to fit them to more birds next year. We’ve chosen to work with the European shags, as they are particularly vulnerable to the impacts of extreme weather and remain in coastal areas year-round. The data we’re collecting will give us insights for both shags and similar diving birds such as the Great cormorant.”

They hope that the data will help them to understand how the European shag and Great cormorant, will respond to different weather conditions and predict whether they will be resilient enough to cope with the more extreme weather brought on by climate change.

Time-lapse cameras which take photos every 30 minutes are also installed all year round at key roosting sites around the North Wales coast, where the shags and cormorants dry their feathers off after fishing. Neither bird has totally waterproof plumage. This helps them to dive, by reducing their buoyancy, but means that they have to dry their wings after diving. The researchers are collaborating with computer scientists from Bangor University to develop bespoke software to automate the counting of seabirds, in thousands of images.

“Cormorants and shags are very recognisable, and many people will have seen them around the coast, drying their wings out on the rocks. But although they are a common sight, their populations are still at risk in the UK, which is why it’s so important to better understand the threats they face and how they are responding.”

During the breeding season, other time-lapse cameras, taking pictures every ten minutes, have also been installed at nests on Puffin Island to see how regularly the birds are returning to feed their chicks.
The team plan to gather additional data using these technologies over the next two years. The results will then be combined with archive data on both the Great cormorant and European shag populations going back to 1985, and compared with modelled weather conditions to understand the potential future impacts of a changing climate on coastal seabird populations.