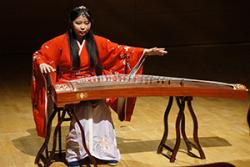 Dian Yu has reached the highest level of examination success in guzheng performance in the Chinese system.Bangor University undergraduate Dian Yu, who plays the guzheng (Chinese zither), was one of six finalists to be selected by a panel of internationally renowned judges for the final round of the World Music Competition in the recent Wales International Harp Festival 2014 in Caernarfon.

Dian, a second year student at the Bangor Business School, has reached the highest level of examination success in guzheng performance in the Chinese system, and has been playing the instrument for over 15 years.

“…had played with technical excellence and a high level of musicianship.”

Hosted by Galeri in Caernarfon, the Wales International Harp Festival (20-26 April 2014) featured a week of concerts, workshops, masterclasses and competitions to celebrate the harp and remember William Mathias’ 80th Birthday, and musicians came from around the world to perform.

The Festival's World Music Competition was sponsored by the Confucius Institute at Bangor University. Speaking at the competition's award ceremony, Dr. David Joyner, Executive Director of the Institute, congratulated the 17 contestants from eight countries on representing the finest ambition of the Confucius Institute movement: to build friendship and understanding between China and the countries of the world though cultural exchange. He commented:

“Cross-cultural events like these are a fantastic way to bring people together to celebrate the wealth of musical talent here in Wales and beyond. We are delighted that Dian Yu has received such a high acclaim for her performance, and we hope this experience will introduce the Chinese guzheng to many who may not previously have heard of the instrument”.