This is the finding of a team of scientists from the North West Cancer Research Institute in the School of Medical Sciences at Bangor University.

The research team, led by Dr Ramsay McFarlane, has previously identified a group of human genes that are usually only expressed in the testis are often found to be switched on in many different cancer types. As these genes are specific to cancer cells and testis, they could potentially be used to identify and destroy tumour cells. Understanding why they are switched on and what function they perform in cancer cells could help scientists to develop ways to exploit them and develop novel therapies.

The research, which was a collaboration with Dr Lee Parry’s team at the European Cancer Stem Cell Institute at Cardiff University and computational medicine group in Austria, identified that when Testis EXpressed gene 19 (TEX19) is turned on in certain cancers it is linked with a poor prognosis, as TEX19 is needed to allow a tumour to grow. In the future TEX19 could be used to help identify cancer at an early stage and could potentially be targeted to prevent tumour growth in a range of different cancer types. This work was funded by Cancer Research Wales. CRW have been big supporters of all cancer research in Wales and this work would not have happened without their support.

of the North West Cancer Research Institute (School of Medical Sciences), the lead author of the paper, explained.

"One of the difficulties we face in treating cancer is targeting the tumour cells while sparing the healthy ones. Identifying and understanding genes such as TEX19, a testis specific gene that is incorrectly switched on in tumours, has great potential to make a step forward towards the goal of a more targeted approach to cancer detection and therapy."

a collaborator on the study, who runs an independent research group in the School of Medical Sciences into causes of colorectal cancer, stated “We believe that this class of cancer-specific genes confer stem cell characteristics to cancers, potentially helping them evolve to avoid current therapeutic strategies; demonstrating that TEX19 contributes to cancer cell survival is an important step in new anti-cancer drug discovery here in north Wales.” 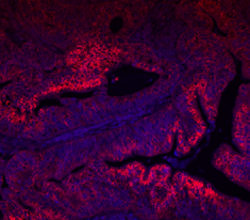 image shows a colorectal cancer sample stained with the TEX19 protein (red), showing that important regions in the tumour have high levels of TEX19 gene expression.