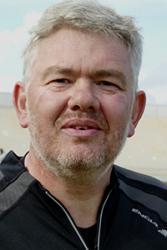 Professor David ThomasProfessor David Thomas, Head of the School of Ocean Sciences at Bangor University, has been appointed to the Science Board of the Natural Environment Research Council (NERC), the UK's largest funder of independent environmental science, training and innovation, delivered through universities and research centres.

The Science Board is the key advisory board which advises NERC’s Council's on scientific matters. It is responsible, among other things, for developing NERC's integrated science strategy and for advising on the balance of the science portfolio and advising on the strategic priority of funding new programmes and initiatives.

The post will commence in January 2017 for a period of two years, which can be extended for a further two years.

Prof Thomas said: “I look forward to contributing to the UK’s long-term strategy for research excellence in the environmental sciences. It is a remarkable opportunity to be given the chance to input at such a strategic level”.

Prof Jo Rycroft-Malone, Pro Vice-Chancellor (Research) at Bangor University commented: “It’s a sign of the high esteem in which Prof Thomas is held that he has succeeded in this appointment. The appointment of Bangor University academics to roles such as this is also a clear signal of our research excellence and reflects well on the environmental research being conducted here.”

Prof Thomas is Head of School, Chair of Marine Biology and Director of Sêr Cymru National Research Network for Low Carbon, Energy and Environment, a major pan-Wales initiative funded by the Welsh Government Sêr Cymru initiative and the Higher Education Funding Council for Wales. The Network supports collaborative and interdisciplinary research in Wales into the interactions between land, water, the provision of food and energy production, at different spatial scales across air-land-water systems.

Since he came to Bangor in 1996 Prof Thomas’ main research activities have focused on the ecology and chemistry of Antarctic and Arctic sea ice. In the past 10 years he has combined this with research much closer to home into how the chemistry of organic matter released from soils changes as it passes into rivers and eventually to the sea.