Bangor rolls out the red carpet for ‘Jack to a King’

A film about a Welsh club’s meteoric rise to the heights of the Premier League will be given its north Wales premier in Bangor this week.

‘Jack to a King’ charts Swansea City FC's incredible journey from the sale of the club for just £1 to their £90 million promotion to the Premier League.

The screening on Thursday 16th October at 7pm in the Main Arts Theatre in Bangor will feature a question and answer session with the executive producer Mal Pope.

The screening will be in association with Documentary Wales/Dogfen Cymru. Joanna Wright, a lecturer at the School of Creative Studies and Media, is 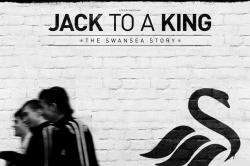 a member of the steering group.

“We want to show this film because it's not just a film about football, but a story with a universal appeal for both football fans and a non-football audience, about how people came together to save something important to their community,” she said.

"Documentary Wales aim is to support screenings by Welsh filmmakers and with Welsh subject matter.”

The film was the second most popular, based on a screen per screen average, at the Welsh box office last month. Mal Pope said it was now the highest grossing football documentary in the UK.

He described the true-life rags-to-riches story as "Under Milk Wood meets Gladiator".