A social psychiatrist from the University's School of Social Sciences is leading a team of psychiatrists and social scientists to work with colleagues in South India to prevent deaths by suicide. 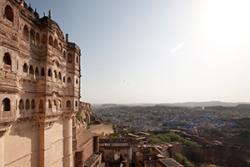 A view overlooking Mysore city.South India has one of the highest suicide rates in the world. Although clinical services exist to help people with mental health problems, cultural and other factors mean that people who have harmed themselves often are not assessed for treatable mental illness. This means that they are more likely to go on to kill themselves.

Professor Rob Poole and Professor Catherine Robinson co-direct Bangor University’s Centre for Mental Health and Society. They bring clinical and social science skills together in addressing complex health problems. They have been awarded a prestigious grant from the Tropical Health Education Trust’s Health Partnership Scheme, which is funded by the Department for International Development.

The £60,000 award will support an educational programme in India focussing on training-the-trainers to establish a sustainable programme so that 100 general doctors in two hospitals in Mysore will be able to assess people who have harmed themselves, and then arrange treatment for mental illness where appropriate.

Professor Poole explains: “This project has been designed with our colleagues in Mysore to meet a need that they have identified. We are working as a true collaboration, and sustainability beyond the life of the project is a key element. We will be conducting a rigorous evaluation, and if the programme can be shown to be effective, we hope to roll it out to other groups of doctors and other areas of the country.”

The team will be using a computer assisted assessment tool developed by Professor Vimal Sharma, which guides health professionals with no psychiatric training through an assessment that takes 15 minutes. It generates diagnoses and recommendations for further action. The project will run from September 2015 to spring 2017.

Writing to congratulate the team on the Award, Rt. Hon. Grant Shapps MP, Minister of State for International Development said:

“You and your organisation will be helping to  improve health systems in countries where support is greatly needed… partnerships such as your own… do an important job delivering tangible benefits and improving health outcomes in some of the poorest parts of the world.”