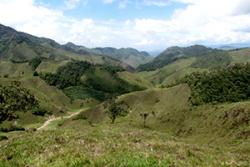 Researchers carried out a survey of carbon stocks, biodiversity and economic values from one of the world’s most threatened ecosystems, the western Andes of Colombia.

The main use of land in communities is cattle farming, but the study found farmers could make the same or more money by allowing their land to naturally regenerate.

Under carbon markets designed to stop global warming, they could get paid to change the use of their land from growing cows to growing carbon – receiving around US$1.99 per tonne of carbon dioxide that the trees they grow remove from the atmosphere. 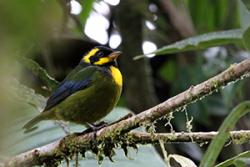 The Gold-ringed tanager lives in a very small area in the western Colombian Andes and is listed as Endangered on the IUCN Red List.: image: GilroyThe move would also help boost the populations of many critically endangered species.

There are limited financial resources available to tackle climate change and biodiversity loss, so there is an urgent need to simultaneously address both issues.

Lead researcher Dr James Gilroy from the University of East Anglia’s school of Environmental Sciences carried out the research while at the Norwegian University of Life Sciences.

He said: “This research shows that there are great environmental and ecological benefits to changing land use from cattle farming to forest, and there may even be financial benefits too.

“If these areas were instead allowed to regenerate to forest, then significant amounts of carbon dioxide would be captured from the atmosphere. Biodiversity would also be restored, improving habitats for many species at risk of extinction – all at minimal cost. 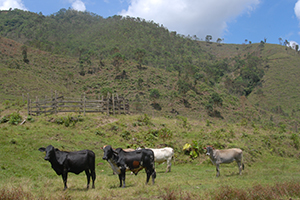 Cattle pasture in the foreground and young, regenerating secondary forest in the background: image:EdwardsDr Paul Woodcock, a postdoctoral researcher in the School of Environment, Natural Resources and Geography at Bangor University, is a co-author on the paper, and commented: “Globally, forests store huge amounts of carbon, so the idea of paying for forests to be regrown could be an important part of strategies to combat climate change”.

But there is concern that land values in some regions are too high to make such carbon payments economically viable.

“In our study, carbon accumulated rapidly in regenerating forests. Combined with the very low profits from cattle farming in the region, this shows that payments for regrowing forest in the Tropical Andes would be affordable”.

The study also found that letting forests regenerate had a massive impact on the populations of threatened species.

In secondary forests in the region, researchers found 33 of 40 red-listed bird species that are threatened with extinction. However, in cattle pastures there were only 11.

“Providing people are willing to spend the money, this could be a critical mechanism for stopping climate change and protecting some of the world’s most endangered species.

“The economic benefits of cattle farming are minimal, so this is a way farmers could make the same, if not more money. The land would be rented off farmers for 30 years and they would be paid for the carbon grown.

“We studied older forests that are around 20-30 years old and found they had recovered around half of the carbon of a really mature forest. More carbon comes back every single year, and as it does so, large numbers of highly threatened species return.

“The impact on reducing the biodiversity extinction crisis and climate change could be huge.”