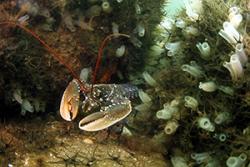 A lobster in it's seabed habitat.: Image credit: Pascal Dubois.The first and only fully-protected marine reserve in Scotland is proving highly beneficial for marine conservation and fisheries, with lobsters more than doubling in numbers and increasing in size.

They found that protection in the marine reserve was beneficial for lobsters, with their density, length and weight all being greater than that found at other sites. Catches of egg bearing female lobsters were also twice as high in the reserve, and these females carried an average of 22 percent more eggs– increasing breeding potential.

Tagging studies also showed that lobsters are spreading out from the marine reserve as numbers grow, thereby boosting local fisheries.

However, although adult lobsters are thriving, juvenile lobsters and brown and velvet crab numbers are declining, which may be evidence of competitive displacement or predation.

This could be due to the relatively small size of the Lamlash Bay reserve, showing that larger reserves are needed to allow marine ecosystems to recover more naturally.

Dr Bryce Beukers-Stewart and Dr Leigh Howarth (right) tagging lobsters.Dr Bryce Beukers-Stewart, Lecturer in York’s Environment Department and supervisor of the study, said: “Our findings provide evidence that temperate marine reserves can deliver fisheries and conservation benefits, but they also highlight the importance of investigating multi-species interactions, as the recovery of some species can have knock-on effects on others.”

Dr Leigh Howarth, who led the study during his PhD at the University of York and is now employed at Bangor University’s School of Ocean Sciences, added: “Studies into the effects of marine reserves remain scarce in temperate and cold waters and are particularly limited in Europe and the UK. However, our research within Lamlash Bay has shown that a wide range of species and habitats can benefit from protection.”

“Marine reserves are only one part in creating sustainable fisheries. It is widely agreed that a combination of managing fishing effort, fishing gears, and establishing protected areas, all of which have received mutual consent from managers, fishers, and other stakeholders, is by far the most effective way to restore stocks and marine ecosystems”

The Lamlash Bay marine reserve was created off the Isle of Arran in 2008 following a decade-long campaign by the local Community of Arran Seabed Trust (COAST).  The group has been crucial to the reserve’s success, assisting with research and encouraging the community to keep a watchful eye on activities in the area.

In other marine reserves illegal fishing has been a problem, but in this case any suspicious activity has been reported to authorities and in several cases fishing boats have been encouraged to move on by COAST members.

Following on from this success, a much larger Marine Protected Area has been established around the south of Arran, although this area does allow some low impact fishing methods such as potting and diving.

Marine reserves and marine protected areas, where fishing and other extractive activities are restricted, are being established across the globe, allowing natural ecosystems to recover and flourish.