Even Coral Reefs are affected by socio-economics 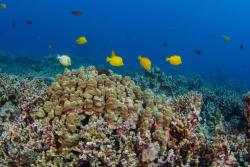 Coral reefs around Big Island in Hawai’i, where coral reefs exist in close contact with human populations.: Image credit: Brian J. ZgliczynskiMarine biologists working to save the world’s coral reefs say that they are increasingly being affected by human activities. As a result, the marine biologists now need to include an assessment of the effects of activities, perhaps in distant markets or cities, on the survival of coral reefs.

Writing in a special issue of Functional Ecology, “Coral reef functional ecology in the Anthropocene”, and using coral reefs as an example, the scientists call for the inclusion of socio-economic activity into account when predicting future ecosystem responses of coral reefs.

Rather than solely considering local human impacts such as fishing, and nutrient run-offs into the sea from agriculture, or sedimentation as a result of coastal development, models will need to include the effect of economic or demographic activity in distant markets, through increases in global CO2 levels, global demands for fish or tourist numbers.

Dr Gareth Williams of Bangor University’s School of Ocean Sciences, lead author of the paper and a Guest Editor of the special edition explains:

“Predicting what drives the dynamics of coral reefs today in the Anthropocene requires a radical shift in thinking, a new approach to coral reef ecology. This will involve collaborative research between natural and social scientists across scales.  We have called this new approach ‘social-ecological macroecology’.” 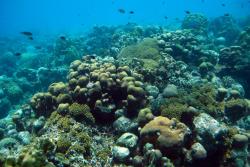 Coral reefs in the entrance to Curacao harbour in the Caribbean. These reefs are subjected to intense human pressures, such as boat traffic, fishing, and land runoff.: Image credit: Mark Vermeij“Measuring only local effects such as fishing is missing the wider picture. In fact, there are complex socioeconomic drivers that ultimately dictate fishing levels on a reef, drivers such as trade, consumer demands, distance to markets and human migration. We need to work to understand how these global human activities are linked to local-scale effects such as fishing, and how they interact across scales.”

“We hypothesise that, although biophysical drivers still influence coral reef ecosystem structure and function, their ability to offer predictive capacity over many ecosystems, including coral reefs, will become increasingly compromised as we move further into the Anthropocene.”

Describing the changes facing coral reefs and the marine environment in general, the paper outlines how our seas are particularly vulnerable to human impacts- not only from sea-temperature rise and increasing acidification but also from alien species and microorganisms, which are able to cross the vast ocean by attaching themselves to or sheltering under mobile floating plastic islands. This has been shown to be a dispersal mechanism for tropical fish and for Atlantic fishes to cross the deep-water Mid-Atlantic Barrier. It is also facilitating alien species invasions and providing a mechanism by which disease-causing pathogens of reef corals can spread.

Recent research has even suggested that human infrastructure, such as oil and gas installations across the North Sea, could provide a connected regional network of coral ecosystems capable of supplying larvae to natural populations downstream. Needless to say, we live in a new era and so do coral reefs and we need to adapt how we study them accordingly.