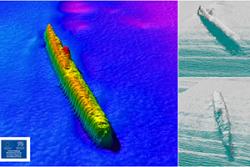 An image from a multibeam sonar survey of an area approximately ten miles northwest of Bardsey Island reveals the wreck of the U-87 which was lost with all 43 hands on Christmas Day 1917. Historic wrecks around Wales’ coastline, such as that of a German submarine sunk 10 miles off Bardsey Island at the tip of the Llŷn Peninsula on Christmas Day 1917, are to play a part in assisting Wales’ growing marine renewable energy sector.

Over the next two years, marine scientists from Bangor University will be surveying the coast of Wales as part of the ERDF-funded SEACAMS2 project led by the University in partnership with Swansea University. The researchers at Bangor University’s School of Ocean Sciences and Centre for Applied Marine Sciences are undertaking collaborative research, including marine surveys, to support the sustainable growth of the marine renewable energy sector in Wales.

The marine renewable energy (MRE) sector is developing technologies to capitalise on Wales’ excellent wave and tidal resource, to create sustainable energy. The researchers intend to include surveys of shipwrecks located around the Welsh coast as models for what might happen to any structures placed in the same or similar areas of the seabed.

Sonar images of the historic wrecks, taken from the University’s research vessel, Prince Madog, will reveal how the tides and currents have removed or deposited sediments around the wrecks on the seabed. The oceanographers can learn how the presence of structures on the seabed can change how sediments are carried in the water or deposited, and over what sort of timescales.

One of the lead researchers on the project, Dr Michael Roberts of the School of Ocean Sciences explained:

“It is well understood that submerged structures such as wrecks and MRE devices will affect the flow of water around themselves, depending on the design of the structure, as well as the strength and direction of the tidal flow and the type of seabed on which they sit. There are ways to model such effects but as with all such techniques, you need observational data to help validate and refine these models so that they can provide crucial information to the marine renewable energy sector at finer scales and over longer timeframes. It is hoped that the data will also improve our understanding of marine processes across a range of sites throughout Welsh waters and provide developers with answers to some basic but very important questions.”

“Colleagues are also examining how these structures can effectively act as artificial reefs influencing, for example, whether they attract an increased numbers of fish and how different materials influence bio-fouling.  It is hoped that this research will also support the sector in terms of designing infrastructure and developing effective and efficient monitoring systems and strategies to better understand the relationships between marine life and engineering structures on the seabed over time.”

This research will also greatly benefit the heritage and tourism sectors in Wales by enhancing our understanding and appreciation of Wales’ extremely rich maritime history, associated with major conflicts of the twentieth century.

The results of these surveys are already providing Bangor scientists with images of previously unexplored seabed at an unprecedented level of detail such as this area which includes the wreck of the U-87 which was lost with all 43 hands on Christmas Day 1917.  The German submarine was rammed by a British naval vessel shortly after it had sunk a cargo vessel nearby.  It is anticipated that results from such work will contribute to the overall aims and objectives of the potential HLF funded project ‘Commemorating the forgotten U-boat war around the Welsh coast 1914-18: Exploration, Access and Outreach’ led by RCAHMW.

“We’re really thankful for the surveys which Bangor University are undertaking. They are allowing us - for the first time in perhaps 100 years- to actually see the relicts of the Great War as fought at sea just off our own coast.  These are the underwater, out-of-sight memorials, rarely visited, poignant, thought-provoking, resonate reminders of the cost in lives of the life during the wartime.  Encounters between merchant ships and enemy submarines, such as U-87, are by far the greatest cause of the 170 losses in Welsh waters –that is, in comparison to losses caused by ships setting off contact mines. Each site has a moving story of its own which we are hoping to explore and retell, with the help of the museums and archives of Wales, as part of our partnership project.”

See also this story from  the Royal Commissionon the Ancient and Historical Monuments of Wales.