How forests recover rapidly on logging roads in the Congo Basin

This article by John Healey, Professor of Forest Sciences, Bangor University and Fritz Kleinschroth, PhD Graduate and Researcher at CIRAD, Bangor University was originally published on The Conversation. Read the original article. 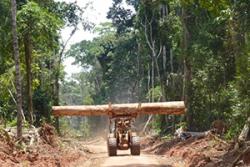 Roads built for logging in the Congo Basin have implications for forest management.: Image courtesy: Fritz KleinschrothLarge areas of tropical forest worldwide are used for selective logging which requires extensive road networks to access trees harvested for timber. It is well documented that building roads into intact forest can have consequences for forest ecosystems. This is because they lead to fragmentation and facilitate access for people which can lead to long-term forest degradation or deforestation.

We conducted a study of roads in forests in Central Africa over a period of 30 years. We studied an area of 108 000 km2, which is larger than Sierra Leone. We made some startling findings. The main one is that the vast majority of roads are transient and in fact provide better habitats for the recovery of diverse species of trees than adjacent logged forests. But we also learnt that the recovery of biomass – the total weight of the living trees, which contains their stocks of carbon – on abandoned roads was slow.

These findings provide important evidence for the long-term management of logging road networks in tropical forests. They show that it is important to close roads from further vehicle use after the end of logging operations, but it is a good plan to re-open these same roads for use when the next phase of logging takes place in each area of forest. Our results also show the excellent potential to use the land cleared alongside roads to grow the next crop of timber trees.

Conversion of tropical forests to agricultural crops, like oil palm in Southeast Asia and soya bean in the Amazon, has been the main source of environmental concern elsewhere in the tropics but in the Congo Basin, the main focus has been on selective logging of forests for timber. Back in 2007 Nadine Laporte and colleagues reported that more than 600 000 km2 (30%) of forest in Central Africa had been allocated by governments as concessions for logging.

Recently there has been a trend towards the application of certification standards to improve the environmental performance of these operations. But there have still been many scientific reports about their negative effects on forest wildlife, including primates and birds, through habitat disturbance or increased poaching. The logging roads used to extract timber are often a major focus of this conservation concern.

Logging roads in the Congo Basin

Our recently published paper reports on the fate of roads built for selective logging in the Congo Basin and discusses the implications for forest management. A remote sensing analysis covering an area of more than 100 000 km2 over a time span of 30 years enabled long-term monitoring of roads from the time they were built until they disappeared.

These observations showed that only 12% of the road network has been permanently open. The remaining 88% was abandoned within a few years of timber harvesting. Changes in the satellite images over time clearly indicated the moment when the road surface was fully covered by vegetation.

But how is this vegetation characterised in terms of structure and diversity? How long do different groups of species dominate after road abandonment and how fast is the recovery of biomass?

To answer these questions, an extensive field study was carried out in eastern Cameroon and northern Republic of Congo, covering the full temporal sequence of roads abandoned over the last 30 years. 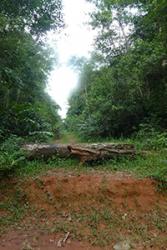 These results do not mean that there is no long-term negative impact of roads on forest vegetation. But in the study area, they are less than people would have expected. The slowest measured recovery was in the accumulation of tree biomass on road tracks. This is projected to take hundreds of years to reach the same level of carbon storage as old-growth forests, which means that building logging roads causes an increase in carbon emissions and their global warming potential that will take a very long time to recover.

After some time the understorey of vegetation regrowing on roads becomes dominated by herbs. This impedes further tree regeneration, just as in the adjacent logged forests in this part of the Congo Basin. Unregulated hunting also remains a problem. During the early years after abandonment poachers can hardly be stopped from using logging roads. But over time vegetation recovery makes it more difficult for motorised hunters to use abandoned logging roads.

Should abandoned logging roads be reopened?

Reducing the long-term impact of logging roads on forest ecosystems is an important element of sustainable forest management. Their demonstrated habitat potential could make road edges suitable places for growing a future crop of timber trees either by planting seedlings or tending those that regenerate naturally from seed – what the foresters call silviculture. At the same time, the effective closure of roads after logging operations remains crucial to avoid threats to the forest ecosystem, especially through hunting.

But logging operations are typically repeated in the same area every 30 years, which leads to the question: what happens to old roads if the same forest area is logged more than once? Surprisingly, of all the roads in such areas, only one third have been reopened. All the other new roads were built next to the historic network. The first cut is the deepest –- this remains true for roads built into intact forests.

Given the findings of slow biomass recovery, our studies conclude that more old logging roads should be reopened to avoid creating new ones.