Dr Matt Hayward, Senior Lecturer in Conservation in the College of Natural Sciences at Bangor University was part of a team that has identified the critical role that large predators play in controlling herbivores in ecosystems. 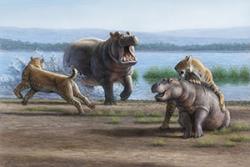 Illustration by Mauricio Anton. The research, led by Blaire Van Valkenburgh of UCLA, predicted the size of prey killed by the diverse mega-predator species that existed during the Pleistocene (up until ~10,000 years ago) and found they were capable of killing even the largest herbivores (juvenile mammoths and mastodons for example). These predicted kill weight ranges were based on an extensive research program Matt has run on extant large predators, since he worked in the field on lion reintroduction in South Africa.

“I have been researching the preferred prey of large predators throughout the world for the past decade, so it is exciting to see this work being used in other areas, such as palaeontology,” commented Dr Matt Hayward.

Read Science's coverage of the research.