Evidence is rapidly accumulating that ocean acidification and elevated temperatures will have catastrophic consequences for marine organisms and ecosystems. In fact, it is something we are already witnessing. Coral reefs are bleaching, while snails and other calcifying marine organisms struggle to build their shells, scales and skeletons and juvenile marine animals even struggle to navigate to suitable habitats.

Yet many primary producers, including seaweeds, are predicted to thrive in the acidic oceans of the future – as they use CO₂ from the seawater to produce energy by photosynthesis. 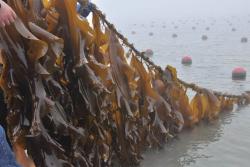 Seaweed in Sungo Bay, Rongcheng, where China’s largest kelp farm is located.: Dong Xu, Author providedHumans have eaten seaweeds for tens of thousands of years and today the diets of billions of people, especially in Asia, are based on cultivated seaweeds. However, while future ocean conditions may improve the yield of farmed seaweeds, we do not know how the nutritional content of seaweeds will be affected by climate change. To investigate this, we recently looked into how the iodine content of seaweeds will be affected by future climate change scenarios.

Seaweeds are one of the best natural sources of iodine, and this essential mineral is used by the body to make thyroid hormones. But both too much and too little iodine can change the way the body’s thyroid gland works. If climate change were to affect the amount of iodine in seaweed, humans – and other animals – who rely on it as a staple part of their diet may suffer serious health problems.

For this recently published study, we simulated current and future ocean acidification conditions in laboratory and outdoors settings. To conduct the outdoor experiments, we enclosed seawater in cages made of very small mesh polythene nets so that environmental conditions such as CO₂ and temperature could be manipulated and responses monitored, while all other environmental conditions remained the same as the natural environment.

We used three kelp species – Saccharina japonica, Undaria pinnatifida, and Macrocystis pyrifera – as well as the coastal seaweeds Ulva pertusa, Ulva intestinalis, Gracilaria lemaneiformis and Gracilaria chouae, for the research. With the exception of M. pyrifera, these seaweeds are widely consumed by humans across the world – for instance, in sushi, soups and in the Welsh delicacy laverbread. M. pyrifera was selected as it is a preferred food source of marine invertebrates, such as sea urchins and abalone, which are harvested by the fishing industry.

In ocean acidification research like this, oceanographers monitor the partial pressure of CO₂ in seawater. This figure reflects the amount of dissolved CO₂, which is measured as parts per million (or µatm) and is an indicator of how acidic the oceans are. The Intergovernmental Panel on Climate Change predicts that future CO₂ in the oceans will more than double by the year 2100 – rising from current levels of 400 µatm to 1,000 µatm – if no mitigating action is taken against climate change. 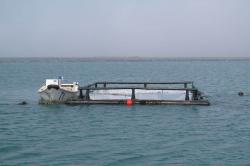 The experiments in Sungo Bay.: Dong Xu, Author providedWe found that seaweeds grown in conditions which followed future ocean acidification predictions accumulated more iodine than seaweeds grown in present-day conditions. However, in the scenarios we tested, elevated temperature was not as important as ocean acidification in causing iodine accumulation in seaweeds. This means that while we expect the yield of a very important food crop to increase under future climate change, levels of iodine will also increase, affecting human nutrition.

We also traced elevated iodine content from seaweeds to their consumers. Natural consumers of seaweeds such as fish and shellfish are also a rich dietary source of iodine for humans. Using an outdoor feeding experiment, we examined the effect of consuming seaweeds under future ocean acidification conditions on the edible shellfish, abalone (Haliotis discus). We found that iodine concentrations increased in shellfish tissue after eating seaweeds with elevated iodine concentration. In addition, we saw that the concentration of thyroid hormones in the shellfish tissue decreased. This provides evidence that ocean acidification impacts the quality of seafood by changing the concentrations of an essential mineral with consequences for consumers.

There is a risk that as the world’s climate continues to change, people who eat seaweed as a staple part of their diet may consume too much iodine, which can lead to a wide range of health problems. Since seaweeds and shellfish underpin the nutrition of billions of humans around the world it is essential to understand how the iodine content of seafood will change under global climate change. This information can for instance be used by the World Health Organisation to provide recommendations on appropriate levels of seaweeds consumption to maintain a sufficient daily iodine intake.