Cancer is a disease which can affect anybody worldwide. There approximately 200 different types of cancer which are known to affect humans, including common cancers such as lung cancer and breast cancer and other less common forms such as cancer of the pancreas. Although cancer is not responsible for the most deaths worldwide it can be a long and drawn out disease.

There are three main methods of treating cancer including surgery, radiotherapy and chemotherapy. For the purpose of the research we are interes 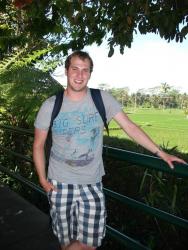 ted in chemotherapy. The chemotherapy agents which are in current use are highly toxic compounds and are also non selective meaning that in effect the patient is being medically “poisoned” in the hope that the cancer will die first. Both cancer cells and healthy cells are destroyed when using these medications which is why the side effects such as hair loss, weight loss and general ill health is usually observed. It is often said that the treatment for cancer is worse than the disease itself.

In hard tumours such as in lung cancer an effect called hypoxia can be observed. A healthy cell contains around 30 % oxygen while hypoxic cells contain as little as 3% oxygen. In order for the cancer cells to survive the levels of reductase enzymes are elevated to allow for the anaerobic production of energy. Usually the low level of blood supply to these tumours prevents efficient activity of existing cancer drugs but the elevated concentrations of these enzymes can allow for pro drug therapy.
Pro drug technology allows for the selective deployment of highly toxic drugs into cancer cells, whilst healthy cells are left relatively unaffected.

The research has focussed on the synthesis of tirapazamine analogues. Tirapazamine is itself a pro drug which has shown good anticancer activity in vivo but not in vitro. It has been hypothesised that this low activity is due to its poor solubilty. By using a quinone based pro drug release mechanism and a “linker” which is also easily metabolised we can deliver the tirapazamine into the cell before the pro is released activating the tirapazamine. Currently several of such molecules have been produced each with slight structural differences  particularly in the linker and we are awaiting  biological testing to see whether the activit has been improved.
p.m.harper@bangor.ac.uk