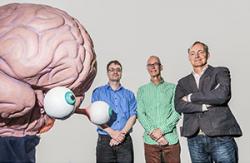 The study is being led by researchers at Bangor University’s School of Psychology with Betsi Cadwaladr University Health Board (BCUHB) and neurological experts at the Walton Centre in Liverpool.

They are studying the effects of touch screen “spatial reasoning games” on the part of the brain used to control movement in Parkinson’s patients.

Early research involving 16 people with Parkinson’s suggests the computer games, which require users to perform tasks like using mental imagery to rearrange shapes to fit a physical space, could help stimulate one of the impaired areas of the brain affected by Parkinson’s and improve motor function.

The research comes as national charity Parkinson’s UK calls for new treatments, including non-drug therapies, to give patients better control of their movements.

Led by Dr Charles Leek, Professor of Cognitive Neuroscience at Bangor University’s School of Psychology, the initial study showed some evidence that Parkinson’s patients were able to move faster and initiate movement more easily following a period of “targeted cognitive stimulation” on the computer games.

They have now received a £33,000 BCUHB Pathway to Portfolio Funding Award to fund a second study involving 60 people with Parkinson’s, which aims to examine the potential benefits of computer-based intervention in greater detail.

Professor Leek explained: “This project was born out of research we completed in 2001, using the School of Psychology’s research dedicated MRI scanner to study how different parts of the brain are involved in controlling our movements and other brain functions. The work shows some of the benefits from collaborative research on basic science and clinical practice.“We’re trying to apply some of the understanding we have of how the normal brain works to help improve motor control in people with Parkinson’s.

“By having patients perform simple computer based tasks we hope to be able to effectively stimulate specific parts of the brain affected by the disease, which could lead to improved motor function.

“These kinds of tests are incredibly simple and involve people making judgements about visual spatial relationships. They involve the brain doing quick calculations of the dimensions of an object from a different orientation and how it will fit into the space provided.

“It’s a form of cognitive stimulation. We’re effectively trying to get people to perform tasks that will stimulate a particular part of the brain and as a result we hope to get that part of the brain working more efficiently.”

Aaron Pritchard, from BCUHB Research and Development and a co-applicant on the study team, welcomed the multi-disciplinary approach to the study, with Bangor University’s School Psychology, BCUHB clinical neurologists and care of the elderly consultants plus neuro-psychologists.

He said: “There is a wide range of expertise involved in this project. Here in North Wales, we have a long-established portfolio of research into non-drug based interventions for Parkinson’s.

“This project makes a key contribution to helping us better understand the relationship between spatial awareness and movement in Parkinson’s, and how this might be used to develop future therapies.”

Parkinson’s is a degenerative disease of the nervous system characterised by muscle rigidity, tremor, poor balance and slow movement. It is associated with a deficiency in the neurotransmitter dopamine, which helps to regulate motor function.

Claire Bale, Head of Research Communications and Engagement at Parkinson’s UK, said: “Parkinson’s is a condition that can affect every aspect of a person’s life – gradually taking away control of their body and reducing independence. For this reason, people with Parkinson’s urgently need better treatments, including non-drug therapies, that will give them the greater control they need.

“Many people with Parkinson’s already practice non-drug therapies, such as regular physiotherapy, speech exercises and relaxation techniques, to improve movement, ease stiff muscles and become more flexible. These therapies can relieve symptoms that aren’t improved with the use of medication and can be beneficial for physical and emotional wellbeing.

“So far, there is no conclusive evidence that brain stimulating computer programmes can be used as an effective non-drug therapy for people with Parkinson’s. But we are keen to see what potential there is by using emerging technologies, such as brain training, to improve symptoms of the condition. We will be very interested in the results of this research.”

The scientific study is called ‘Early stage feasibility assessment of a non-pharmacological intervention for motor slowing and fatigue in Parkinson’s disease’. It records the volunteers’ movement ability prior to playing the touch screen games and then reassesses their motor function afterwards to note any improvement.

Professor Leek added: “In the initial study we found that the volunteers became faster at moving and could initiate movement more quickly.

“One of the exciting aspects to the research is that the approach is so simple and can be available on any computer device whether phone, tablet or PC.

“It’s a completely non-pharmacological intervention. At the moment, for most individuals, treatment of Parkinson’s involves drug-based therapy, which comes with side effects.

“Parkinson’s is a degenerative condition and gets worse over time. Our hope is that this could be something that can complement drug-based intervention and improve treatment outcomes, and quality of life, for people with Parkinson’s.

“The idea that a range of basic tasks could deliver clinical benefits is exciting. If successful, the approach may potentially be applied to other conditions involving motor dysfunctions such as stroke and other degenerative diseases.”

Professor Leek said the university’s latest research would record the responses of patients over a much longer timeframe to see whether the approach continued to produce a clinical benefit.

“If that’s sufficiently promising, the next stage would be large scale scoping testing hundreds of people at multiple sites. These things take a lot of time and we’re still very much at an early stage but it’s a significantly promising avenue to pursue,” he said.

Anyone interested in finding out more about the work of the Wolfson Centre for Cognitive Neurosciences and Neuropsychology at Bangor can contact Professor Charles Leek, School of Psychology, Bangor University, Tel: 01248 382948; Email: e.c.leek@bangor.ac.uk