This article by  Thomas Rippeth, Bangor University was originally published on The Conversation. Read the original article. 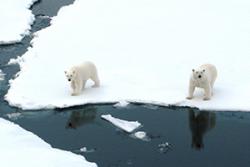 Image credit: Ben LincolnThe Arctic region is warming up twice as fast as the rest of the planet. This rapid temperature increase has caused record-breaking seasonal retreat in Arctic Ocean sea ice in recent years. The latest minimum recorded was set in September 2012, while the sea ice cover in September 2016 tied with 2007 for the second lowest extent ever recorded. And it’s not just coverage that’s the problem, sea ice is also thinning, with a current average thickness of 3.2m in the Central Arctic.

Sea ice melts because of the atmospheric temperature, and due to heat from warm water. Relatively warm currents flowing into the Arctic waters from the Atlantic Ocean provide the largest oceanic heat input to the region, bringing enough heat to completely melt Arctic sea ice cover within two years. This inflowing Atlantic water has warmed by 1°C since the 1970s, and is warmer than it has been for at least 2,000 years. However, this warm water is isolated from the sea surface, and the underside of the sea ice, too, by an intervening layer of lighter, colder, fresher Arctic water. 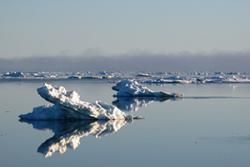 Image credit: Ben LincolnThe Arctic is pretty unique compared to the world’s other oceans and seas: it is a very quiescent (that is, inactive or dormant) ocean with low levels of turbulent mixing. The very low levels of turbulence are attributable to a combination of weak tides and the presence of sea ice, which dampens out the influence of the winds in driving ocean currents. This lack of activity supports the isolation of the Atlantic water heat from the sea surface.

Over the past decade, ocean current speeds driven by the wind have increased in response to the decline in seasonal sea ice cover, despite there being no significant changes in Arctic winds. This, together with increased wind-induced currents in open Arctic waters, has led to the suggestion that the declining sea ice cover will result in increased levels of turbulent mixing by the wind. This new mixing could potentially lead to the stirring up of the Atlantic water heat – driving a further decline in sea ice cover.

However, research conducted by our team has suggested that the increasing wind driven currents have not actually led to Atlantic water heat being increasingly stirred up in the central Arctic Ocean.

Our team used the “perfect storm” of record low ice levels and the strongest Arctic summer storm ever recorded in August 2012 to make a series of measurements of turbulent mixing. What we found offered a glimpse into a future of the Arctic Ocean. 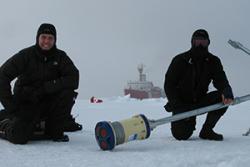 Deploying equipment through the sea ice.: Image credit: Ben LincolnThe measurements were made by dropping a torpedo-shaped instrument off the back of the ship – which collects small scale data on changes in the current speed as it drops – to estimate turbulence. This information was then combined with ocean current measurements made from an instrument line suspended through a hole in the ice.

The new measurements support previous ones, showing an increase in ocean currents due to high winds and ice-free conditions. But we also observed that in fact there is no increase in turbulent mixing at the depths of the Atlantic water. In other words, despite the ice-free and stormy conditions, there was no evidence that the warm Atlantic waters were being increasingly stirred up with the cool Arctic Ocean.

So what does all this mean? Well, it suggests that the layer of colder, fresher polar water sitting above the Atlantic water is – for now – sufficiently stable to prevent the wind-driven turbulent mixing from penetrating to the depths of the Atlantic water. The sea ice cover is not the be all and end all to stop ocean warming in this manner, however: melting sea ice and increased river flow in the warming world will reinforce the layer of colder, fresher polar water, creating a competition between increased mixing and a more stable layer of polar water.

The new measurements have also revealed that there are some enhanced levels of turbulent mixing over the continental slope regions, around the perimeter of the Arctic Ocean basin. This adds to evidence already published by our team which showed geographical “hot spots” of enhanced mixing resulting from both tidal and wind driven currents over the continental slope region. These hot spots lead to sufficiently large heat fluxes which can completely melt a 2m thick slab of sea ice in a year.

All this information combined has led us to predict that in a future Arctic Ocean with greater areas of open water, there will be enhanced heat fluxes resulting from increasing levels of wind driven turbulence. But it will be geographically restricted to “hot spots”, which lie over regions of steep topography such as the continental shelf break at the edge of the basin, and the ridges which cross it.