Putting poverty under the spotlight 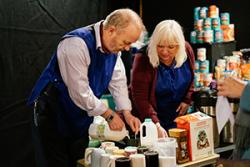 David McGinty and Sarah Somerville, two of the actors in Food Bank as it isBangor University’s School of Social Sciences is combining discussion and drama to put the spotlight on poverty at a public event on Wednesday 8 November.

‘Poverty: Local, National and International’ will showcase pioneering research from academics and students at the School, which shows how poverty affects people's identities and shapes their lives. The event forms part of a week of the UK’s Economic & Social Research Council Festival of Social Sciences public engagement activities.

Also taking the stage, having recently performed for Jeremy Corbyn and other MPs at the Houses of Parliament, are theatre group, Empty Plate Productions. They will be sharing their powerful play Food Bank As It Is, in their second performance outside London.

Food Bank As It Is was written by food bank manger Tara Osman and was produced by a group of volunteer actors and friends. They've run 8 performances across London and they recently showed the play at Oxfam House in Oxford on World Food Day.

Tara has explained what drove her to write the play: "I was becoming increasingly aware that many people, including countless children, are going hungry because the welfare benefits system is not fit for purpose. The presence of children or vulnerable adults in a household makes absolutely no difference. I have written this play because I believe that what is happening to these people and therefore us, is morally unacceptable and needs to be challenged and challenged again until it stops."

Patrick Butler of The Guardian has described it as "a topical, important play about poverty, food bank use and what drives it".

The morning talks will focus on current issues such as global poverty, inequality, worklessness, and food bank use.

Social Policy Lecturer, Dr Hefin Gwilym will focus on poverty in Wales and global poverty. He will explain why relative poverty is so entrenched in Wales despite policy efforts to address it. Moreover, he will explain why the UN's claim that global poverty has reduced over the years is strongly contested, with some academics estimating that 4 billion of the world's population are living in poverty.

Social Sciences PhD student David Beck will be discussing his research on the growth of food banks in Wales.

Postgraduate student Louise Prendergast will be sharing her PhD research which explored young people’s perspectives and experiences of work and welfare. Her findings highlight the challenges young people face when unemployed: negotiating the benefits system, financial costs, stress and insecurity. These have potential implications for Universal Credit claimants. For example, under Universal Credit, claimants earning under 35 hours a week minimum wage, must show evidence they are searching for more hours. Requirements to look for work have been present for those in receipt of out of work benefits, but are extended those in work under Universal Credit. This is backed by fines and sanctions for non-compliance.

“Poverty makes people’s lives shorter and more brutal than they need to be. Poverty is not a lifestyle choice and is not simply about being on a low income and going without- it is also about being denied power, respect, good health, education, housing , basic self-esteem and the ability to participate in social activities.

It is vital that research is conducted into the many faces of poverty we see, not just in the UK, but internationally and for Governments and key partners to work effectively to mitigate. This event is particularly relevant now due to the impact of the Welfare Reform which has had devastating effects on some families in the UK. I am particularly interested to hear how the work being undertaken within this ESRC sponsored event has an impact on business, the public sector and civil society and contributes to the competitiveness of the UK in the world, the effectiveness of our public services, and the quality of people's lives.”

People wishing to attend the free one day event at the John Philips Theatre, College Road, Bangor on 8th November can register for free tickets at https://www.eventbrite.co.uk/e/esrc-festival-socsci-many-faces-of-poverty-local-national-international-tickets-38429355236