The last chance for Madagascar’s biodiversity 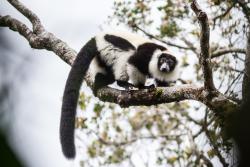 Many of Madagascar’s iconic lemur species such as this black and white ruffed lemur are critically endangered. : Copyright Daniel Burgas.Scientists from around the world have joined together to identify the most important actions needed by Madagascar’s new government to prevent species and habitats being lost for ever.

In January, Madagascar’s recently-elected president, Andry Rajoelina, began his five-year term of office. A group of scientists from Madagascar, the UK, Australia, the USA and Finland have published a paper recommending actions needed by the new government to turn around the precipitous decline of biodiversity and help put Madagascar on a trajectory towards sustainable growth.

Professor Jonah Ratsimbazafy, from the University of Antananarivo and one of the paper’s co-authors said: “The United States have the Statue of Liberty, France has the Eifel tower…. For us in Madagascar it is our biodiversity (the product of millions of years of evolution), which is the unique heritage we are known for around the world. We cannot let these natural wonders, including 100 different types of lemur found nowhere else, disappear”.

The group say that Madagascar’s protected areas, some of the most important for biodiversity in the world, have suffered terribly in recent years from illegal mining, logging, and collection of threatened species for the pet trade. They suggest that much of this illegal activity is linked to corruption. They emphasise that the insecurity which goes alongside this illegal exploitation is bad for people as well as nature. 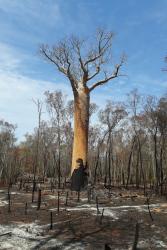 Large scale clearance of Madagascar’s dry forests (to clear land for peanuts and corn) is decimating remaining patches of this rare habitat, home to species found nowhere on the planet. : copyright Tahina Roland Frederic.Dr Herizo Andrianandrasana, the first Malagasy DPhil graduate in Oxford University’s 800-year history and an experienced Malagasy conservationist, commented: “the destruction of Madagascar’s biodiversity benefits few; those who profit from rosewood trafficking, illegal mining in protected areas, or the prohibited trade in species like our Critically Endangered tortoises. However, the costs are widespread and affect all Malagasy.”

The team takes great care to emphasise that conservation must benefit, not harm, local communities.

Professor Julia Jones of Bangor University, who led the study said “Madagascar is one of the poorest countries on the planet. More than 40% of children under five are stunted due to malnutrition, and the country has more people living in extreme poverty than almost anywhere else on Earth. Conservation therefore needs to contribute to, and not detract from, national efforts targeting economic development. It must not make situations worse for the rural poor who are so often marginalised in decision making.”

The team believe that action in the five areas could make all the difference. Professor Ratsimbazafy again: “The time has come for action-It’s not too late to turn things around in Madagascar, but it soon will be.”

Professor Jones added: “Since his election President Rajoelina has given positive indications that he recognises the importance of Madagascar’s biodiversity. We will make sure that he has a copy of this paper and that the contents are well shared within Madagascar (and with the potential donors whose support will be needed). Our co- 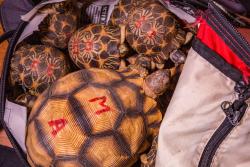 Critically endangered Malagasy species such as these critically endangered tortoises maybe extinct in the wild within the next few years if illegal collection isn’t stopped. : Copyright Chris Scarffe.authors, and the many other active Malagasy and international scientists who care about Madagascar, are all ready to help the new president ensure that his term can deliver the turning point needed for Madagascar, and its wildlife.”

The paper ‘The last chance for Madagascar’s biodiversity will be published in Nature Sustainability on 29th April. It is under embargo until 29th April 2019 at 16:00 London Time / 11:00 US Eastern Time.