As the United States gears up for another Presidential Election, a Bangor University Lecturer’s book on the mythology of American Presidents has been shortlisted for a prestigious award.

The American President in Film and Television: Myth, Politics and Representation by Dr Gregory Frame of the School

of Creative Studies and Media has been shortlisted for the British Association of Film, Television and Screen Studies Best Book Award.

The book explores the portrayal of fictional US presidents on screen, and asks how these constructs relate to our understanding of the presidency as an institution and the United States as a nation.

Dr Frame said that he was “absolutely delighted” to be nominated.

“I started work on this project in 2009, so this feels very much like the culmination of a lot of hard work,” he said.

“It is also an honour to be recognised by fellow scholars working in the field.” 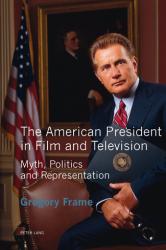 ran for the presidency.

“A lot of articles were published in the press that said Hollywood had ‘predicted’ his rise to prominence because there had been a number of fictional black presidents before there was a real one,” he said.

“I thought this was a bit optimistic, as the films the preceded Obama’s presidency offered quite stereotypical representations of black men. I set out to demonstrate how and why this was the case, and it grew from there.”

Combining textual analysis with close attention to political and historical contexts, it addresses the ways in which representations of the president have responded to a period of profound change in American politics and society, encompassing the end of the Cold War, 9/11 and the collapse of the economy.

The reasons behind the proliferation of images of the president during this period are explored, from the archetype in American genre cinema (Air Force One, Independence Day and Deep Impact) to the idealised fantasy figure in network television (The West Wing, 24 and Commander in Chief).

Dr Frame found that the depiction of presidents had changed markedly over the decades.

“It seems during periods of great turmoil there is more of a desire to represent the presidency (and politics more generally), either to offer reassurance, or to critique the institution,” he said.

“There were a number produced during the Great Depression in the 1930s, for example, and also at the height of the Cold War in the early 1960s, during and just after Kennedy’s reign.

“Since the 1990s, however, there has been a distinct shift. The president is now much more likely to be the protagonist in a film or television narrative.

“The style and tone of that narrative is not always reverential towards the office (such as Air Force One, Independence Day, and more recently, White House Down and Olympus Has Fallen).

“A lot of this has to do with the demystification of the presidency after the Cold War and the greater scrutiny offered by the mass media.

“Long-form serial drama has also enabled elaborate, extended investigations of fictional presidencies that sometimes more psychologically plausible than the ‘real thing’, like The West Wing or House of Cards, for example.”

With the new election season in full swing, Dr Frame admits that the reality is often stranger than the fiction he analyses.

“It is impossible to tell whether they are influenced by popular cultural representations of the President, but the simplicity of the solutions they are offering certainly hints at the possibility!” he said.

“If the final contest for the White House is between Donald Trump and Bernie Sanders, it would have the flavour of the most outlandish of Hollywood films: our desire for ‘extreme’ candidates is normally indulged in fictional realms, while the more sensible choices tend to be the ones for whom people actually vote.

“This year, the opposite seems true. It is ironic therefore that recent TV shows tend to view the President with a great deal of scepticism, like House of Cards and Scandal, for example. Film and TV actually seem more realistic than the candidates themselves about what the presidency can achieve these days.”

Dr Frame is currently working on a project concerning the representation of American monuments and memorials in visual culture.

The award ceremony will take place at the association’s annual conference, which will be held 14-16 April 2016 at the University of Reading.