Why we should give prejudiced students a voice in the classroom

his article by Corinna Patterson, Lecturer in Sociology, at the School of History, Philosophy and Social Science is republished from The Conversation under a Creative Commons license. Read the original article.

In the space of a few years, Britain’s political landscape has changed. Now, generally, young people are proportionately more likely to have socially liberal and socialist views, and want to remain part of the EU. Meanwhile, older demographics proportionately voted for Brexit, and were said to be largely responsible for voting the Conservatives into office in 2017.

This polarisation was especially prevalent in university towns. But general trends do not pick up on the more complex and messy reality of perspectives and sympathies. One study of young people’s views on Brexit and the EU, for example, recently found they are actually less tolerant of immigration than is widely thought.

Up until 2016, students seemed remarkably unpolitical as a majority. Many had no overt political stances or felt any affiliation with any formal political perspective. The last couple of years, however, have seen a distinct change in their knowledge and engagement with current issues and debates. A change that is both exciting for me as a teacher, but also concerning.

Recently, student support for the Labour party has risen, thanks largely to grass roots organisation Momentum which has been credited with changing Labour’s narrative into a more relevant discussion of issues that are of direct concern to young people today.

Emerging in parallel to this, however, have been very protectionist views, spurred on of course by UKIP and Nigel Farage. The party and its former leader have been perceived by many as saying things “as they are”, again offering a refreshingly blunt change from the usual party-political rhetoric. This is an ideological position that is gaining support right across Europe and beyond, giving people the ability to legitimise racist attitudes.

These more protectionist views – many of which have been close to, or quite in line with, what we might call fascism – are also becoming more overt in schools and universities too. It seems an extreme word to use in relation to a small minority of students’ views, but the values and perceptions that I have personally heard confidently argued at times, have been very worryingly in line with this ideology.

I had previously assumed (wrongly perhaps) that everyone in a class would be against fascism, having enough knowledge about World War Two and the Holocaust to see the dangers of the lies propagated by such ideas of supremacy.

It wasn’t until this year that I realised that I could no longer hold such an assumption, and by doing so I may well be alienating the students who hold such views from discussions. This could in itself serve to further entrench their views rather than aid the development of a critical, evidenced-based perspective of their own. 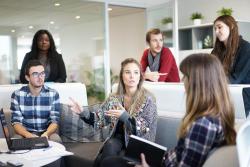 Healthy debate, generated by a range of perspectives is very welcome in classrooms and lecture halls, and necessary for a healthy democracy. The concerning issue that is arising in society at large, and becoming increasingly prevalent in universities, is the polarisation of views.

This is not simply about students developing racist, fascist or right-wing views however. The emergence of these views reveals how globalisation has left many behind especially those who feel disempowered, disconnected and threatened by the changes that have and are taking place around them. It is a backlash to much of the progress many feel has been made in recent years, in terms of gender and racial equality.

The problem we have is that young people now obtain their perspectives from a very narrow range of social media sources. And, because of social media algorithms, their political views can be formed and reinforced by a narrow range of perspectives. These views then become unchallenged and recognised as legitimate. Leaders are hero worshipped, and understanding of different perspectives, experiences and people can diminish while evidence-based, independent, critical analysis (a skill lacking in society at the best of times) is lost, polarising perspectives and narrowing debate.

Academics and universities need – as journalist John Morgan points out – to work out how to approach the problem carefully “lest they portray themselves as part of the global elite resented by populist supporters”. Students need to feel able to express and explore their ideas. But we as teachers should be helping them to challenge their own preconceptions through evidence-based research, and develop the skills to critically analyse information for themselves.

The fear of non-conformity, of gender and racial equality and of diversity needs to be addressed so that cultures and global challenges become issues that are looked at from a position of understanding and contextuality, not from a reactive and defensive position. We can’t ignore any student who does not agree with a more liberal standpoint. Instead, we need to challenge them in a way that doesn’t further create defensive entrenchment of views, alienating those who perhaps already feel alienated.