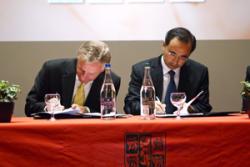 Professor John G Hughes (left) and Professor HUANG Jin signing the agreement.The first Confucius Institute anywhere in the world to have a focus on Law, is being opened officially at Bangor University.

The Confucius Institute is being launched by First Minister Carwyn Jones, in the presence of Mr SHEN Yang, Minister-Counsellor of the Chinese Embassy. 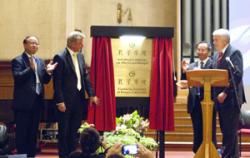 "China will be increasingly important to the future of Wales and this new Confucius Institute, the first to focus on law anywhere in the world, is a major boost in creating further links between our two countries.

“I wish the institute all the best as it becomes a new cultural bridge that develops our relationship and understanding of each other’s history and culture.”

A week of activities, which are open to the public, follows to mark importance of the occasion.  The series of free Seminars and Exhibitions, runs between 11-14 September at the University’s Powis Hall.  These events reflect the cultural activities to be provided to schools and the community by the Institute. They include interests such as Chinese calligraphy, Chinese music, Chinese cuisine, Chinese clothing, Chinese dance, Chinese history and Chinese cinema.

“This is a major development for Bangor University. Confucius Institutes spread understanding about Chinese language and culture. They have become a platform for cultural exchanges between China and the world. The Institute at Bangor will play a key role sharing Chinese culture and learning with schools and cultural organisations in North Wales and North West England, as it develops a program of cultural activities. The Confucius Institute in Bangor will provide our students and the local community with unprecedented access to many remarkable aspects of Chinese culture and enhance the links between our two countries”.

The Institute was established following contact between a delegation of Bangor University Vice-Chancellor John Hughes, Professor Dermot Cahill, Head of Bangor University Law School and Dr Wei Shi, Bangor Law Lecturer, who visited Professor Huang, President of the China University of Politics and Law, one of the most prestigious Chinese universities. 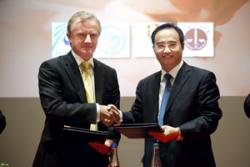 Bangor University is renowned for its cultural tradition and high quality education, while China University of Political Science & Law is a leading University in Chinese legal education.  I believe that the establishment of the Confucius Institute with a focus on Law will deepen the cooperation and communication between the two institutions as well as the two countries.”

Professor Dermot Cahill, Head of the Law School at Bangor University said:
“In addition to the distinctive Chinese cultural programme of events and exchanges that the Institute intends to provide, the unique feature of the Bangor Confucius Institute is the distinctive 'law flavour'.  The Institute will help spread understanding about Chinese law and the Chinese legal system in order to help foster mutual understanding, as trade relations grow between the United Kingdom and China.

“We will be launching an LLB degree in Law and Chinese Studies in the near future The Confucius Institute will provide an ideal platform from which to help British law students learn Chinese and, at the same time, understand more about the cultural context of law. This understanding is essential for any prospective lawyer with international ambitions.”