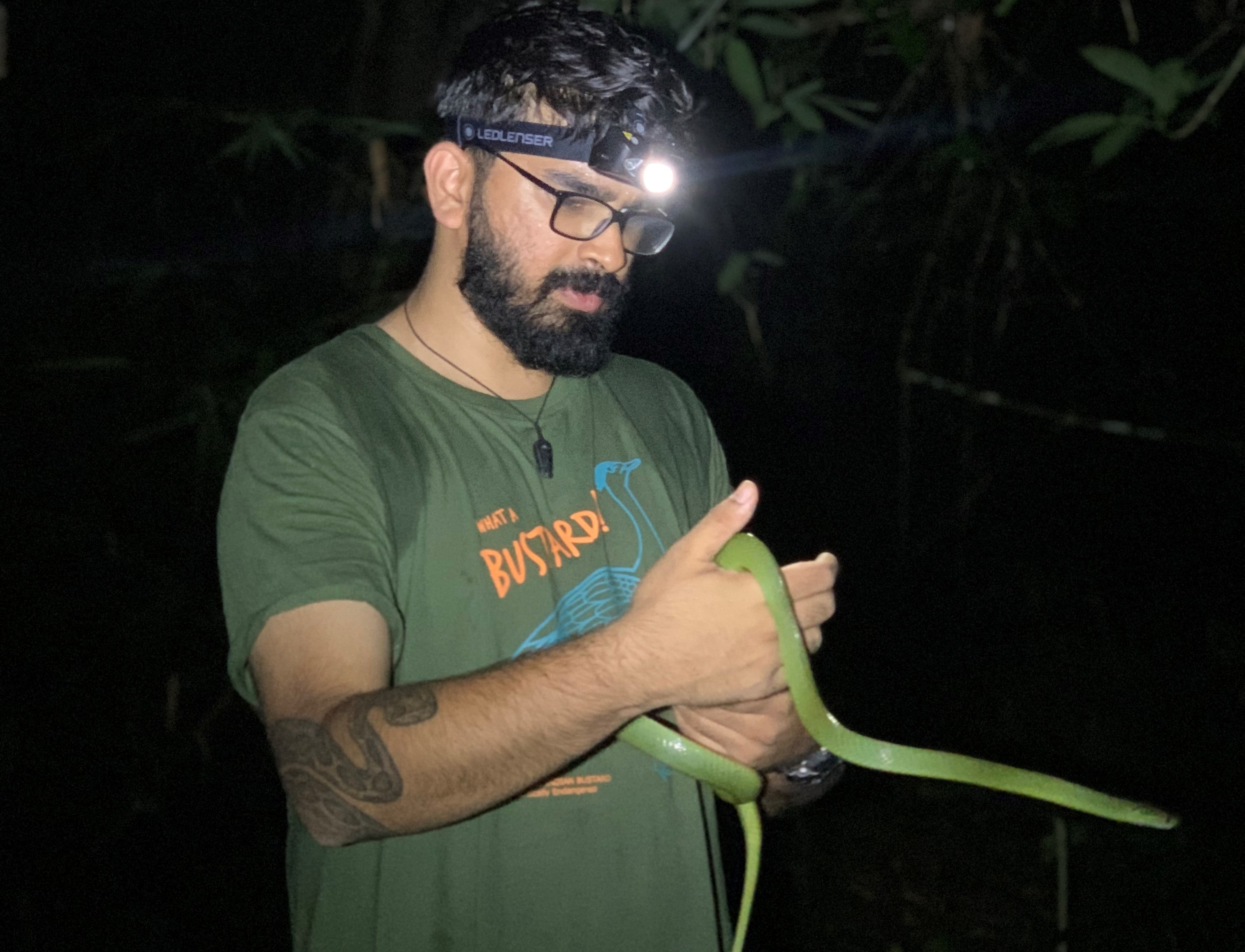 Belonging to a country that boasts of more than 300 species of snakes, my fascination for snakes began at a young age with the ones found right in the backyard. But with India being the snakebite capital of the world, I realized there is a significant need to find answers on how to save people and snakes without compromising either. I began my journey to making this interest into my life’s work by enrolling myself in the integrated Master of Zoology course at Bangor University. During university, I realized that the field I would like to specialize in is that of herpetology, with a more definitive focus on ophiology. I started a four-year integrated undergraduate course, Zoology with Herpetology (MZOOL), at Bangor University in 2016.

At university, I completed my third-year thesis titled, “The Phylogenetic and Morphological Analysis of Western Himalayan Pit Viper, Gloydius himalayanus”. I completed this work under the guidance of Dr Anita Malhotra. During the fieldwork, I learnt the skills needed for collecting tissue samples and morphological data for analysis. I also got acquainted with the lab work that entails the extraction and sequencing of genes for phylogenetic analysis. I understood how to use software programs that perform phylogenetic analysis. Our team is currently working on publishing this work as a part of the larger BITES initiative (http://bites.bangor.ac.uk/) started by Dr Malhotra. During the fourth-year thesis, I worked on understanding the spatial ecology of Russell’s Vipers in Karnataka under the supervision of Dr Wolfgang Wüster. During this project, I learnt to conduct a radiotelemetry project, collecting spatial data, using statistical packages in RStudio and ArcGIS to analyse spatial data and produce maps reporting these results. I completed my degree with a First-Class qualification in June 2020.

After completing the degree, I headed to West Bengal to work with Society for Nature Conservation, Research and Community Engagement (CONCERN) to work as a Research Lead. We focus primarily on working on snake and snakebite research and community work in East and North-East India. One of the first ideas I worked on here was to find a way to improve and better document the snake rescue and release work that we did in Hooghly district, West Bengal. I developed a form on the data collection software, EpiCollect5, to collect data about the rescue by our rescuers. This is the first time any such data has been collected by a rescue network in India. We plan on publishing this work once a year of data is collected and analysed. I helped in conducting venomous snake rescue training workshops for Forest Department Personnel. I undertook education programs with rural communities to help mitigate snakebites and the dos' and don’ts in case of a venomous snakebite. I got a chance to help with working on an early elephant warning detection system that CONCERN has developed in Purulia. We set up laser systems that were triggered when an elephant crossed it to warn the people of the nearest villages and therefore, reduce the loss of life to elephant conflict. In addition to working on such projects, I have also added skills such as herpetofauna husbandry work and handling and working with venomous snakes in rescue situations.

I started my PhD on January 2022 under the supervision of Dr Anita Malhotra and Dr Axel Barlow. It focuses on using novel methods to understand the genetics, taxonomy and ecology of two genera of medically significant snakes of India, Daboia and Bungarus. My hope is to try and provide more clarity on the snakebite crisis in India through this research.

The PhD research I am undertaking has three facets to it. The first is looking at using snake rescue encounters from the Hooghly district, West Bengal to collect spatial and temporal data on the human-snake conflict in the region. A crucial aspect of understanding snakebite is the overlap between snake activities and human activities. However, there is a heavy reliance on research into venom and on models that depend on bite data. Very few studies have looked at focusing on snake ecology and distribution to assess the risk factors. Along with the absence of distributional data, there is an absence of any data regarding where within the confines of rural landscapes snake-human conflicts occur. An issue with collecting these data is the lack of a simple and efficient methodology that can be replicated with little error.  There have been some studies that have developed a methodology to estimate high-risk areas of snake conflict, although these do not typically use distributional information on snakes. More recent studies have used snake distributional data (e.g., from distributional models derived from occurrence records), but none use real-time snake occurrence data collected from the field. One opportunity to collect such data is via snake rescues. When snakes are caught during rescue calls, data derived from these events can potentially provide a large amount of relevant information. For this project, the data is being collected by 14 trained rescuers from a not-for-profit NGO. This includes information such as the date and time, species, site of the rescue (e.g. kitchen, storehouse, Rice Field, Mango Orchard and so on), and the GPS. The data will be analysed for patterns for each medically significant species of snake in the region and provide a more data-driven risk assessment of the human-snake conflict in the region.

The second aspect is looking into the phylogeny and taxonomy of species from the Bungarus genus, Kraits, of India. There are currently 7 recognised species of Bungarus in India. But there are still several gaps in studies into the morphological and phylogenetic variation that may be present within the distribution of each species. For example, the phylogenetic validity of Bungarus sindanus (Sind's Krait) still needs validation as well as the morphological distinction from Bungarus walli (Wall's Krait). Unpublished data as well as anecdotal reports suggest phylogenetic and morphological variation in Bungarus caeruleus (Common Krait), a species whose current distribution covers most of the mainland Indian subcontinent. Along with attempting to answer these taxonomic questions, I am also studying the diversity of diet in kraits using cloacal swabs and DNA metabarcoding. This aspect of medically significant snakes in India has never been studied. Yet several studies have shown the effect that diet has on venom variation, such a study can play a crucial role in understanding the natural history of kraits.

The third and final aspect is creating the first pan-India phylogeny of Daboia russelli (Russell's Viper) using a multi-locus, dated phylogenetic analysis. The output of this work will hopefully provide a clearer understanding of why there is variability in clinical symptoms of Russell's Viper bites from various regions of the country. I am also attempting to test whether ventral scale clippings can be used to produce HMW DNA for a genome assembly. We are going to use a captive Russell's viper for this study which will in turn provide further genetic data on a snake that probably has one of the highest human death counts in the world.