Welsh Technology in Support of the Economy 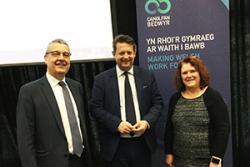 Prof David Shepherd, Deputy Vice-Chancellor, Minister Alun Davies and Delyth Prys of the Language Technologies Unit at the start of the ConferenceInnovative Welsh language Technologies can provide an impetus to the north Wales economy – that was one of the main messages of a conference on Technology and Welsh Language held at Bangor University’s Pontio Arts & Innovation Centre recently (Friday 20 January).

The Conference showcased exciting new developments in Welsh speech technology, discussing how Welsh can help other languages, and explaining how technology is helping to develop the Welsh economy. The conference was sponsored by the Welsh Government and the Coleg Cymraeg Cenedlaethol.

The conference was opened by Alun Davies, the Minister for the Welsh Language and Continuing Education. He was welcomed by Professor David Shepherd, Deputy Vice-Chancellor at Bangor University.

“Ensuring a robust infrastructure for the Welsh language is essential to achieve one million Welsh speakers, and it will remain a priority as we prepare a language strategy for the future. The Welsh Government has invested in language technologies, such as the pioneering ones being launched today.

It’s using Welsh that’s important; it’s vital that Welsh speakers can get hold of technology to support their use of Welsh in every aspect of life.”

The conference was organised by Delyth Prys, head of the Language Technologies Unit at Bangor University’s Canolfan Bedwyr.

Delyth said “The Welsh Government have been very generous in their support of our Macsen project, which is developing a Welsh personal assistant similar to Alexa, Siri or Cortana, and it was great being able to demonstrate our latest achievements to Alun Davies. The Welsh Government have also sponsored a KESS scholarship for a PhD student to work on Welsh speech technology with ourselves and our School of Linguistics, and it was great that the Minister could meet with the student, Indeg Williams.”

In addition to speakers from Wales, Mohomodou Houssouba from Basel University in Switzerland, but originally from Mali, spoke on how he has adapted the Language technologies Unit’s translation technology to work with French and Songhay, and how such technology could be used across languages to save on development costs. Another guest speaker was Cathal Convery, Dictionary Manager for the Foras na Gaeilge Irish Dictionary, discussed the new Irish Digital Strategy for the Irish language. In the afternoon Welsh software companies showcased their commercial products designed to support Welsh. Amongst them was Galactig, who create Welsh apps and television products; Interceptor Solutions who have created LinguaSkin, a multilingual interface for websites; Moilin interactive media company; and Semantise Ltd who create bilingual software for the education sector.

Stefano Ghazzali, a software developer at the Language Technologies Unit and chair of the conference session on Welsh and the Economy, said, “It was encouraging to see so many Welsh companies bringing innovative products to market, creating new jobs and supporting the Welsh language at the same time”.

One of the highlights of the day was the presentation by Dewi Bryn Jones, lead software developer at the Language Technologies Unit, on Macsen and Welsh Speech Recognition. This is a fast moving field showing great promise in improving the technology for every language. The Unit will place the results of the Macsen project on the Welsh National Language Technology Portal, where anyone, including commercial companies, can access the resources and use them in their own products.