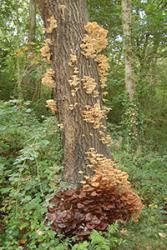 A tree trunk in the woods at Treborth Botanic Garden, part of Bangor University,  has erupted in a profusion of the most amazing array of honey fungus.

The trunk, part of a now dead oak tree, standing next to the north Wales Coastal Path, has become home to a single colony of honey fungus.

Not a rare fungus, this particular example is beautifully coloured and spreads from the ground to well above head height.

Dr Mike Hale, a lecturer at Bangor University’s School of Environment, Natural Resources & Geography and an expert on mushrooms and fungi as well as on tree diseases, went to have a look at the display and explained: 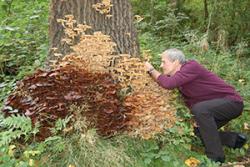 Dr Mike Hale of the School of Environment, Natural Resources & Geography“This is probably part of a far larger fungus- as the fungi spreads through underground ‘bootlaces’ and colonises nearby trees and bridges gaps by colonising dead wood.

Because of the way that it spreads over a large area and can damage living trees, the honey fungus is not well-liked by gardeners.  Of course we associate many mushrooms and fungi with this time of year, and the honey fungus, thrives in wet areas, which occur in some regions of the Treborth woodland. This particular eruption has a strong smell and is spreading its spores which are coming from the fungi as a fine dust. The mushrooms of this fungus are  beginning to rot at one end giving a varied hue across the whole thing.”

The first ever UK Fungus Day organised under the auspices of the British Mycological Society  is on Sunday 13 October, and to mark the event, Bangor University’s Treborth Botanic Garden is hosting a “Fascination of Fungi” event. There will be two opportunities to venture into the ancient woodland in search of different fungi and learn something about these magical and mystical creatures