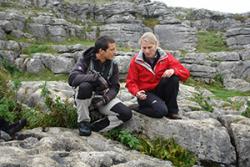 Dr Lynda Yorke explaining to Bear Grylls how the rock beneath them was formed.A Bangor University academic has been providing her expertise for adventurer Bear Grylls’ new TV series.

Dr Lynda Yorke, a lecturer at the School of Environment, Natural Resources and Geography, appears in an episode of Britain’s Biggest Adventures with Bear Grylls. In this brand-new three-part series for ITV, Bear heads out on an epic journey of discovery across England, Scotland and Wales to experience the British Isles at their most spectacular.

The second episode, which airs on Tuesday 22nd September at 9pm on ITV, sees Bear exploring one of England’s most iconic landscapes, the Yorkshire Dales, going on an extraordinary adventure through this spectacular terrain. Bear’s adventure starts at one of the most impressive limestone formations in the world, the magnificent amphitheatre of Malham Cove.

During this episode, he meets geographer Dr Yorke who tells Bear that, 350-million years ago, the high limestone pavement they are standing on was in fact under a tropical ocean, that was pushed upwards by volcanic eruptions and north by plate tectonics.

She explains that as the sea creatures died, they dropped to the bottom of the ocean where over time they became compacted as more and more creatures died, and eventually they formed the rock on which Bear is standing.

Of her experience of working with Bear Grylls, Dr Yorke said: “I am always passionate about communicating science to new audiences. While landscapes like Malham Cove look really spectacular, I believe that knowing something about how they were formed and how they continue to evolve enhances our enjoyment and appreciation of them. As a geographer, that’s what I love to do – unravel the secrets of landscapes, past and present!”

Bear goes on to discover that what really shaped the current landscape was the power of ice and water, as 20,000-years ago during the last Ice Age vast glaciers carved their way through the Dales.

When these glaciers melted, raging rivers ripped the limestone apart creating the valleys and mighty scars of the stunning terrain.

The crowning glory sits on top of Malham Cove, where the lunar landscape is a fantastic example of a limestone pavement.

Dr Yorke explains: “Back in the ice age, all of this area was covered in ice, and as the ice moved across and through this valley it scraped off all the surface soil, revealing the limestone.”

The thousands of years of rainfall turned fractures in the rock into deep crevices, called grykes. As Bear discovers, this creates a micro-climate which is home to a hidden world of woodland fauna.