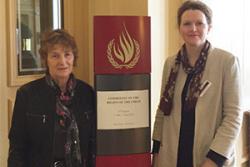 Dr Alison Mawhinney and Ms Carys Aaron of Bangor Law School argue that cuts made by the UK Government to the S4C budget over the last five years may violate the UN’s Convention on the Rights of the Child, which recognises the important role played by mass media in allowing children to enjoy their rights and in developing respect for the child’s ‘cultural identity, language and values’.

They say that key rights affected by the cutbacks include the right of children to access, in their native language, information and material which is of ‘social and cultural benefit’ to them; and the right to ‘seek, receive and impart information and ideas of all kind’ through media ‘of the child’s choice’.

The Bangor lawyers claim that in significantly reducing S4C’s funding, the UK Government could be in contravention of the Convention in two ways: firstly, by reducing the breadth and quality of children’s Welsh-medium programming; and secondly, by reducing S4C’s ability to offer its content and services across a wide range of media platforms.

They argue that S4C plays a critical role in ensuring that Welsh speaking children in Wales and elsewhere are able to enjoy the rights secured for them by the UN. If S4C is not sufficiently funded by the UK Government to carry out this role, they claim that the UK itself will then be in breach of its duties to protect the rights of Welsh children under the Convention.

“The UK Government must recognise the vital role played by S4C – as the sole provider anywhere of Welsh-language children’s programmes –  in respecting, promoting, protecting and fulfilling the rights of children in Wales and beyond with respect to Articles 13, 17 and 29 of the Convention”, explained Dr Alison Mawhinney, Reader in Law.

This week, Dr Mawhinney and Ms Aaron travelled to Geneva, where the UK Government is appearing before the UN Committee on the Rights of the Child to account for the way in which it has implemented the Convention rights during the past five years – a standard requirement as a participating State.

During two days of intensive dialogue, the Committee questioned the Government on its performance under the Convention. Drawing on the Bangor submission, the Committee specifically expressed concern about how cuts to the S4C budget over the last five years has negatively impacted on the right of children in Wales to freedom of expression and the right to access information in their own language. The Government was asked how, in the future, it could ensure the delivery of high quality children's programming on S4C in order to fulfil the Convention rights of Welsh children.

The Committee will now deliberate on this and other issues raised under the Convention, and is expected to announce its recommendations for the UK Government at the beginning of June.