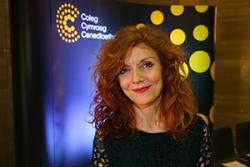 Rhian Huws WilliamsA Bangor University Alumna was awarded an Honorary Fellowship at the Coleg Cymraeg Cenedlaethol’s Annual Congregation recently. The Fellowships were awarded in recognition of outstanding contributions to Welsh-medium Higher Education and the work of the Coleg generally.

Rhian Huws Williams who studied at Bangor from 1976 to 1979 was awarded one of the fellowships.

Rhian Huws Williams was appointed Chief Executive of the Care Council for Wales in 2001, and since then has played a leading role in developing a sustainable, qualified and safe workforce for quality social care services in Wales. She was in the vanguard of developing that workforce into a bilingual one. She has advised the Coleg on identifying priorities for resource investment in health and social care, and is awarded the fellowship in recognition of her commitment to the Welsh language in higher education and in the field of adult education generally.

Rhian said: "Bangor University is very close to my heart. I have studied there twice, receiving two degrees and a professional social work qualification and achieving much of that through the medium of Welsh.

"As someone who received one’s education through the medium of Welsh, it was a matter of common sense to be able to continue studying at university in Welsh. Several academics at the School of Social Sciences delivered their lectures in Welsh at the end of the seventies and early eighties and we discussed our work in Welsh. It was a rich phase and a period when we were fighting for more.

"Having then followed my career in social work and the commitment to social justice, I am convinced of the importance of Welsh-medium university education, in this field especially, and Bangor University has continued to develop and strengthen in the field. It is an important element in ensuring that the language of education turns into working language.

"I feel proud to receive this honour, although I must stress that everything that has been achieved in the field of social work has taken place through  partnership with others.”

Also inaugurated were Geraint Talfan Davies, Chairman of the Welsh National Opera and Honorary Fellow at Bangor University and Ned Thomas, president of the Mercator Institute for Media, Languages ​​and Culture at Aberystwyth University.

Dr Hefin Jones, Dean of the Coleg Cymraeg Cenedlaethol said:  “We are very pleased to be honouring three new Fellows this year – all three have achieved so much in their respective fields, and have been most supportive of the Coleg’s work from the very beginning.”