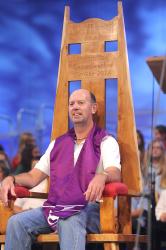 Photo credit: lluniaullwyfan.comCongratulations to Welsh and Drama graduate, Dewi Wyn Williams, winner of the Carmarthenshire National Eisteddfod Drama Medal. Dewi is an experienced playwright and well-known scriptwriter here in Wales. He received the Drama Medal, in memory of Urien Wiliam, donated by his wife and children Eiryth, Hywel, Sioned and Steffan, and £750 from the Huw Roberts, Pwllheli, Memorial Fund. He will also be given the opportunity to develop the work with Sherman Cymru and Theatr Genedlaethol Cymru.

Dewi came top in a competition that attracted 13 applicants for his play, 'La Primera Cena’, using the pseudonym' Non Bobo Marina '. The judges were Sara Lloyd and Roger Williams, and delivering the adjudication on behalf of them both, Roger Williams said, “There is a confident writer at work here, telling the story of a man meeting his father for the first time for thirty years.

“The dialogue is well structured and crafted, full of imagination, and it manages to grasp the audience.”

The play deals with the familiar theme of legacy and the relationship between Nature and Nurture,

In the play a father and son meet for the first time in thirty years, the father having been out of the country following a fatal car accident when the son’s mother died. There is a strong suspicion as to exactly how and why the accident happened and who was responsible. The son, a child in the car at the time, sets out to try to find the truth.

The play is based on a real event from overseas, when a man was accused of trying to murder his wife and child by driving his car into a river. He was imprisoned before being released later because his defence was that his wife grabbed the steering wheel causing the crash.

The play's title comes from the painting 'La Primera Cena' ('The First Dinner') by Dafni Elvira, an artist from Puerto Rico in the Caribbean. It is a parody of 'The Last Supper' by Leonardo da Vinci, showing a group of contemporary women around the table enjoying each other's company. But subtly in the background are men trying to listen-in on the conversation not welcome or invited to join in. Following the accident, this was a very familiar experience for the father...

Dewi was born in Penysarn, Anglesey, Riverside and raised on a farm in the parish of Llaneilian, the son of the late actor Glyn Williams (Glyn Pensarn) and his wife Kitty.

He was educated in Penysarn primary school and then Ysgol Syr Thomas Jones, where he was Head Boy. He attended Bangor University, where he graduated with Honours in Welsh and Drama.

In 1980, he joined the BBC as a deputy floor manager, before joining the Scripts Department, under the watchful eye of Gwenlyn Parry. Working primarily on ‘Pobol y Cwm’, he was involved in the series when it developed from 32 episodes a year to 250 episodes. He remained there for 16 years, before joining S4C in 1996 as Editor and Script Consultant. He left S4C 2 years ago and is now a full-time writer.

Dewi has written many episodes of ‘Pobol y Cwm’ as well as plays like ‘Marathon’ – the first single drama on S4C and the film ‘Lois’. His stage work includes ‘Rhyw Ddyn a Rhyw Ddynes’, the play which won him the Drama Medal at the Urdd Eisteddfod in 1981; the full-length play ‘Leni’ and ‘Difa’, a play which came second in the competition last year, and which will be produced by Cwmni Theatr Bara Caws next year.

He is a member of several international juries. This year has seen him on the Emmys jury in New York (for the seventh time) and as chair of the jury of the Banff Television Festival in Canada. He has also been on the jury for the Rose d'Or, Switzerland, Prix Europa in Berlin and the Golden Chest in Bulgaria. He has also been a part-time tutor in Scripting at Cardiff University.

The ‘Cyfansoddiadau a Beirniadaethau’ which includes the full adjudication for this competition, as well as details of the winners of all the Eisteddfod’s composition competitions, will be available to buy immediately following the Chairing Ceremony on Friday afternoon.

For more information go to www.eisteddfod.org.uk.