An exhibition which outlines the history of taxes in Wales and which encourages visitors to offer their views on the country’s first piece of tax legislation in modern times will be on show in Bangor University’s Management Centre until 28 November.

Finance Minister Jane Hutt launched the exhibition in Bangor before attending the first north wales meeting of the Tax Forum. The Forum, which includes Professor Dermot Cahill, Head of Bangor Law School, is a group of stakeholders which provides advice on tax law, administration and the way in which Welsh tax policy and legislation is developed.

The Welsh Government is currently consulting on the arrangements for the collection and management of devolved taxes in Wales.  These will form the foundation of the first ever Welsh tax regime, and the devolved taxes that we introduce from 2018 will be the first Welsh taxes in over 700 years.

Including research by the Law School’s Gwilym Owen and Nia Powell from the School of History, Welsh History & Archaeology, the Taxes in Wales Exhibition traces the history of taxes in Wales, including historic documents from the National Library of Wales.

“Because Wales never was a unified country before the Acts of Union (1536-43), it is difficult to point to a separate tax system which applied to the whole of Wales. However, pre-Union taxes, levied by Welsh Marcher Lords, did exist, and they applied in the Marches of Wales. An example of “Welsh taxes” before the Union can be found in a list of grievances made against Llywelyn the Last in the summer of 1283 following the Conquest of Wales by Edward I in 1282.”

One such grievance was a tax imposed by Llewelyn of three pence on each great beast. This was done without the consent of the people. It did not apply to the whole of Wales. 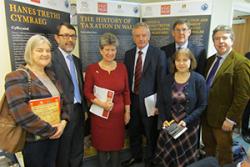 Dr Nia Powell and Prof Huw Pryce, Bangor School of History, Minister for Finance Welsh Government Jane Hutt AM, Bangor Univ Vice-Chancellor Prof John Hughes, Helen Watt, Aberystwyth, Gwilym Owen and Prof Dermot Cahill, Bangor Law School.Another example from an earlier period is food renders (gwestfa) which the free subjects of the native princes paid to support royal government in the several principalities according to the Laws of Hywel, and which lasted until the Union. Although they were paid by the people to support government, they would have had little say in their imposition, which makes them different from modern taxes.

Following the Conquest, the Principality of Wales was subject to English taxation imposed by the English Crown.

“One major difference between the tax imposed by Llywelyn the Last and the new tax raising powers of the Welsh Assembly is the fact that Llywelyn’s tax was imposed by an autocratic ruler and did not extend to the whole of Wales.  Crucially, the new tax raising powers are wholly democratic and extend to the whole of Wales. Such a tax regime has never existed before in Wales’ long history. Lloyd George’s People’s Budget and the passing of the Parliament Act 1911 ended the influence of the House of Lords in relation to taxation. The new Assembly powers in respect of taxation represent further growth in democratic decision making concerning taxation in Wales.”

“I would like to see as many people as possible engage with us to help shape the development of a future Welsh tax regime.

The exhibition has been put together in partnership by Bangor University’s Law Department, the National Library of Wales and Glamorgan Archives

Bangor University Vice Chancellor Professor John G Hughes commented:  “We’re delighted to host the meeting of the Tax Forum which recognises the role played by Bangor Law School in this initiative. The first step towards devolved taxation in Wales is a truly momentous one and this Exhibition places the Tax Forum and Consultation in their historical context. We hope that the local community will take advantage of the opportunity to come and visit the Exhibition and be inspired to respond to the Consultation.”