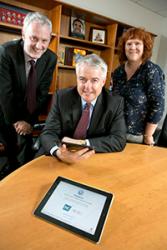 Speech Recognition systems are important for communicating orally with computers, phone systems, television sets, and all sorts of other electronic equipment. In order to create the technology, hundreds of different people need to be recorded reading out specially prepared scripts. It helps to have a variety of voices, young, old, male, female, south Wales, north Wales and learner accents. The recordings will be used to train speech recognition engines who will understand anyone’s voice speaking in Welsh. The research is being led by Canolfan Bedwyr’s Language Technologies Unit, who received a grant from the Welsh Government and S4C towards the project.

“I’m very happy to be able to support this appeal in a practical way. Our Welsh language policy on the Welsh language, ‘Moving Forward’, states clearly the importance of being able to use Welsh with the new technology, and our commitment to ensuring that Wales leads the way in this field.”

"S4C is proud to support the development of the Welsh language on digital platforms, and the development of an efficient voice recognition system will be a significant step for the language and for us as a broadcaster. In recent years, voice recognition devices have become increasingly popular, and are likely to evolve further, so it's vital we ensure that our viewers can use devices such as Smart TVs in Welsh. This app is a way for everyone to contribute to making it happen."

An innovative app has been developed for smartphones and iOS and Android phones to facilitate gathering recordings for this project. Dewi Bryn Jones, the LTU’s lead software developer, whose idea it was to create the app, said:

“In the old days, it was a very laborious task to go around recording people for such a project. With the new phones and tablets, which all include a microphone, it’s easy for people to record themselves speaking. A web link is needed as well, and the sound files are then uploaded automatically to our servers.”

“The script is designed to capture every possible sound combination in Welsh, and the corpus of recordings will be available to research and develop all sort of new Welsh language products. We haven’t used crowdsourcing methods like this before to create a speech corpus for Welsh, but we hope to get a good response from the appeal. The app is very easy to use, and is something practical that people can do for the Welsh language.”

The app was given the name Paldaruo, which means “chattering” in Welsh, as it is a friendly little app that people can talk or natter away comfortably to. The app will be available for App Store (iOS version) and Google Play (Android version) from the 7th of July onwards.