She is one of the most distinguished and prominent researchers on the origins of the human being. 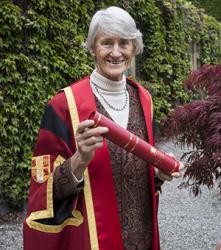 Based in Africa with a research team in the Turkana Basin, Kenya, her work has led to major discoveries of the very earliest human ancestors.

In 1989 she became coordinator of the museums' field research in the Turkana Basin. Her work at nearby Kanapoi in 1994 yielded some of the earliest hominids known, dated at more than four million years.

In March 2001, Dr Leakey and her colleagues announced the discovery of a new genus and species of human ancestor, Kenyanthropus platyops, (flat-faced man of Kenya) which has been dated to around 3.5 million years ago.

Then in 2012 Meave Leakey and her team published the discovery in northern Kenya of the remains of another, more recent species, Homo rudolfensis, dated to between 1.7 and 1.9 million years ago. These finds confirmed earlier suggestions that H. rudolfensis, with a large brain and long flat face, is indeed a separate hominid species that must have lived alongside other human species.

Professor James Scourse from Bangor University said: “Her remarkable discoveries have profound implications for our understanding the origins of mankind. Meave Leakey is truly a world-leading scientist and Bangor is delighted that in addition to being a graduate of this University, she is now also an Honorary Fellow.”