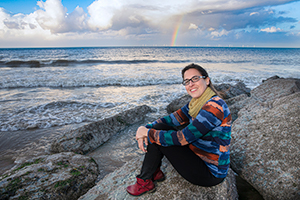 Katrien Van Landeghem at Colwyn Bay with the Gwynt y Mor wind farm in the distanceScientists at Bangor University are playing a critical role in paving the way for one of the world’s biggest wind farms off the coast of North Wales.

They are working with German renewable energy giant RWE on the siting of the Awel y Mr extension which will more than double the size of the Gwynt y Môr wind farm, already the world’s fifth largest.

Their expertise in 3-D mapping the seabed is crucial in plotting the location of the giant turbines and in helping plan for the next generation of deep water wind farms off the coast of North Wales.

Awel y Môr will lie to the west and more than double the size of Gwynt y Môr – Sea Wind in Welsh – which already has 160 turbines spread across 80 square kilometres of Liverpool Bay.

The University’s School of Ocean Science’s mapping of the seabed off the North Wales coast and the Irish and Celtic Seas will play a key role in the Government’s green ambitions to power every home in the country with wind energy by 2030.

Dr Van Landeghem, from Belgium but living in Colwyn Bay, said: “Awel y Môr is a huge development but for the Government to reach its targets we will need many more wind farms, including into deeper waters and we need to ensure these developments are cost-effective yet sustainable for the seabed and the animals it supports.

“Offshore wind is going to be vital in this accelerated schedule to provide low-cost clean power because it is tried and tested – we know the technology works.

“To achieve these renewable energy goals by 2030, wind energy will see major investment but I hope the investment in other options of offshore energy extraction will be increased as well.

“In any case, it means we are going to have to develop our seabed even more carefully now.”

“We want to ensure our projects are developed as responsibly as possible.  Offshore wind will play a crucial role in Wales’ transition to a low carbon future and input from scientists at Bangor University is feeding feed into this.”

Beneath the waves they extend down 30 metres as thick steel cylinders anchored to the seabed and buried tens of metres deep to resist the power of waves and tides.

But the next generation turbines could be further out to sea and anchored by chains to the seabed 100 metres down.

Much of the data and resultant imagery used by RWE has been gathered from the university’s survey ship Prince Madog, based at Menai Bridge, which spends forty days a year on expeditions around the Welsh coastline to map the seabed.

It uses a multibeam system emits sonar signals which bounce back to provide incredibly detailed images of the seabed which still bears the scars of the glaciers which ground their way across it during the last Ice Age 25,000 years ago.

The seabed includes great sand dunes, some several metres high, which can shift and move with the action of the tides and waves.

The School of Ocean Sciences began surveying the seabed in 2012 and in that time have mapped hundreds of square miles and Dr Van Landeghem said: “We have to make sure the integrity of the seabed isn’t harmed and that includes paying attention to where we lay the cables carrying the electricity generated back to shore.

“We have to look at the surface of the seabed and the habitats it contains because sand waves can be a real nuisance and that’s where geo-scientists come into it because we map these areas to show how the sand moves.

“We can track how the seabed has changed because it’s the interface for all these stories which tells us about the past but also about the present and the future in a way that nothing else does.

“We need to take samples, video and pictures because it gives us fantastic quality information for when we develop our seabed more intensively.

“For that to be the case then it’s important that we all work closely together to make this energy transition a success story.”

For more on the School of Ocean Sciences visit https://www.bangor.ac.uk/oceansciences