School of Welsh and Urdd partnership goes from strength to strength 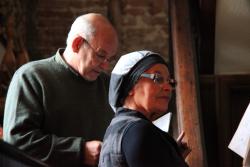 The School of Welsh at Bangor has played a major role in organizing two highly successful residential courses for year 12 and year 13 students of Welsh at the Urdd’s Glan-llyn centre near Bala. Working in partnership with the Urdd – Wales’s largest youth movement – this is the fourth year in succession that such courses have been organized by the School. On November 19-21, second-language students attended a course devoted to numerous aspects of their Welsh AS/Advanced studies.  A similar course for first-language students followed on November 21-3. In all, the courses were attended by 180 AS/Advanced students from all over Wales.

“This is, annually,  a major commitment for us in the School of Welsh”, remarked Professor Peredur Lynch, Head of Welsh at Bangor, “but interacting in such a manner with school students and their teachers it is also a remarkably rewarding experience in educational terms. As a School, we have long-standing relationships with the Urdd movement, and it’s always a great honour to contribute to the movement’s work”.

Huw Antur, Director of the Urdd’s Glan-Llyn Residential Centre, added: “The Urdd appreciates the School of Welsh’s substantial academic input to the success of these courses and its generous spirit of co-operation in the complex task of organizing such a wide-ranging programme of activities. Creating dynamic partnerships with external organizations such as the School of Welsh and Bangor University has always been of vital importance to the Urdd.”