Taboo: working for the East India Company could make you rich ... or dead

This article by Lowri Ann Rees, Lecturer in Modern History, was originally published on The Conversation. Read the original article.

BBC1’s latest historical drama certainly brings something different to the table. Taboo is dark, menacing, violent and at times shocking. In episode one we see James Delaney (played by Tom Hardy at his swaggering best), thought long dead and gone, suddenly return home from his travels overseas. His arrival is dramatic, to say the least. As he comes bursting through the church doors in the middle of his late father’s funeral service, the congregation is shocked to see the returned son.

An aura of sinister mystery surrounds him. Where has he been? Why has he stayed away for so long? What dark secrets is he hiding – and what evil deeds did he commit while in the service of the East India Company?

At this point in the series it’s not yet clear exactly what Delaney got up to while away (but presumably all will eventually be revealed). We know he’s been in Africa, and at some point was involved in a catastrophic shipwreck. Among those who drowned were slaves – what was his relationship to them? There are also hints of the supernatural, perhaps linked to his mysterious mother.

A key player in this intriguing story is the East India Company. What started as a trading company in 1600 became a powerful imperial interest, with substantial commercial and political influence which ruled over India from the late 18th century. Tales of misconduct, dishonest dealings and exploitation abounded. The famous impeachment trial of Warren Hastings during the 1780s and 1790s reinforced contemporary perceptions of a corrupt and unscrupulous organisation.

Fuelled by concerns of mismanagement, Pitt’s India Act was passed in 1784, resulting in the British government overseeing the Company’s rule in India. What’s very clear in Taboo is that the East India Company is a dangerous force, reinforced by Jonathan Pryce’s portrayal of the ruthless chairman Sir Stuart Strange. 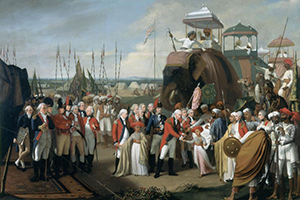 East India Company men at the surrender of Tipu Sultan in 1792: Robert Home [Public domain], via Wikimedia CommonsWhile the tale that unfolds in Taboo is pure fiction, there are certain elements of fact. East India Company men did indeed spend years overseas in its service. Though many perished under harsh conditions, some did return home. Even if their repatriation wasn’t quite as dramatic as Delaney’s, nonetheless, a great deal of intrigue surrounded the homecomings. These men were mockingly nicknamed “nabobs” and were seen as different. Most certainly looked different – in the same way that Delaney’s sun-scorched skin is a noticeable contrast in Taboo, returned Company men bore the mark of their time away under tropical climes.

Looking at the surviving memoirs, letters and diaries of returned Company men, the lasting impact of the east is a running theme. Some returned broken in health and spirits, bearing the physical and mental scars of their time abroad. Others however came back with tremendous wealth generated through imperial exploitation.

Indeed, entry into the service of the East India Company could be a ticket to adventure and great fortune. Through office holding, administration, trade, business or high-ranking posts in the Company’s army it was possible to secure great wealth. Other money-making opportunities, such as plundering or illegal trade, were available and huge fortunes were generated. On his death in 1774, the Company army officer and administrator Robert Clive, known as Clive of India, had amassed a substantial estate amounting to more than £500,000.

The voyage to the east was almost always temporary – these men were sojourners, with a view to returning home, but in a better financial position. The records of correspondence held in estate papers and family collections reveal a desire to return and a longing for home in many Company men.

Those that survived returned to Britain as changed men, bearing the influences of their travels. Some brought fragments of their lives in the east back with them, influenced by cultures, customs, even culinary practices – using recipes for dishes such as curry jotted down in pocket books. There were also those who were accompanied on the return voyage by their illegitimate dual-heritage offspring. 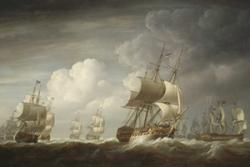 A fleet of East Indiamen at sea.: Nicholas Pocock [Public domain], via Wikimedia CommonsOn their return to Britain, some Company men craved a quiet retirement, supported by their comfortable pension. Others looked to invest their new-found fortunes in local business or industrial enterprise. These men ambitiously sought opportunities to further increase their personal fortunes. Some had aspirations of upward social mobility, purchasing country houses and landed estates, attempting to integrate into the local landed elite. They partook in the social round, indulged in philanthropy, undertook public duties, and some even secured seats in parliament.

We know for a fact that sojourning to the east was a risky business and there was no guarantee of returning home. Though not all may have been as mysterious as Tom Hardy’s gritty portrayal of Delaney, their escapades would have been no less dangerous. Perilous voyages, disease, the unforgiving climate and even tiger attacks ended many a Company man’s life. But regardless of the danger, tales of wonderful riches enticed many an ambitious young man to join the East India Company and embark on the adventure that awaited.