Teaching students to survive a zombie apocalypse with psychology

This article by John A Parkinson, Professor in Behavioural Neuroscience, and Rebecca Sharp, Senior Lecturer in Psychology, both of Bangor University's School of Psychology was originally published on The Conversation. Read the original article.

Playing games is ubiquitous across all cultures and time periods – mainly because most people like playing games.

Games involve rules, points, systems, as well as a theme or storyline and can be massively fun and engaging. And there is an increasing body of research that shows “gamification” – where other activities are designed to be like a game – can be successful in encouraging positive changes in behaviour.

Gamification has previously been used to teach skills to nurses, as well as in wider health settings – such as with the use of the app Zombies, Run!.

Broadly speaking, games work effectively because they can make the world more fun to work in. They can also help to achieve “optimal functioning” – which basically means doing the best you can do.

This can be seen in Jane McGonigal’s game and app Superbetter, which helps people live better lives by living more “gamefully”. It does this by helping users adopt new habits, develop a talent, learn or improve a skill, strengthen a relationship, make a physical or athletic breakthrough, complete a meaningful project, or pursue a lifelong dream.

This is also exactly what we’ve done at Bangor University. Here, students on the undergraduate course in behavioural psychology had one of their modules fully gamified. And it started when they received this message, after they enrolled on the course: 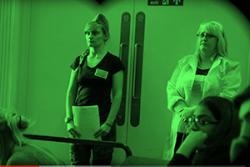 Notice to all civilians: this module will run a little differently. The risk of infection is high, please report to the safe quarantine zone in Pontio Base Five at 1200 hours on Friday 30 September. Stay safe, stay alert, and avoid the Infected.

Curiosity piqued, the class arrived at their first lecture of the semester to be greeted by “military personnel” who demanded they be scanned for infection prior to entry.

They were given a brown envelope containing “top secret” documents about their mission fighting the infection. The documents explained the game, and that the module had been gamified to enhance their learning.

What commenced next was the immersion. In addition to themed lectures and materials, the presence of actors and a storyline that was influenced by choices made by the class, students were given weekly “missions” by key characters in the game.

These online quiz-based missions prompted students to study the module materials between lectures to earn points. Points gained allowed students to progress through levels – from “civilian” to “resurrection prevention leader”. Points could also be exchanged for powerful incentives, such as being able to choose the topic of their next assignment, or the topic of a future lecture.

Part of our thinking behind wanting to teach in this way is because although students enrol at university, they don’t always perform optimally – instead intentions are often derailed by distractions.

At a psychological level, there are multiple competing signals trying to access behaviour – but only one can win. This discordance between goals and actual behaviour is called the “intention action gap”, and gamification has the potential to close this gap.

This is because, successful learning requires a student to set goals and then achieve them over and over again. Games use techniques, such as clear rules and rewards, to enhance motivation and promote goal-directed behaviour. And because education is about achieving specific learning goals, the use of games to clarify and promote engagement can be highly effective in providing clear guidance on goal-direction and action – which can make users less fearful of failure. In this way, gamification can result in students achieving better outcomes by optimising learning. 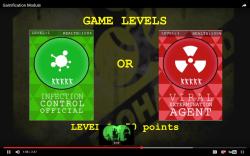 The application of gamification to a module on behavioural psychology was a novel (albeit ironic) approach to demonstrate to students the very concepts they were learning.

When asked their thoughts at the end of the semester, many students said they enjoyed the gamification and liked the immersive experience. Some even asked for more zombies.

Gamification is clearly well-suited to teaching behavioural psychology as it demonstrates directly some of the concepts students are learning. But it could also easily be adapted and applied to other subjects.

Education is what survives when what has been learnt has been forgotten.

So while the students may well forget the precise definition “positive reinforcers” in years to come, they will know implicitly what they are and how to apply them thanks to the game. In other words, they have learned how to learn. And hopefully, their gamified experience will help them survive future “apocalyptic” challenges.