Work on past climates to be recognised by Award

The oldest Geological Society in the world, The Geological Society of London, has recognized the scientific contribution of Dr Paul Butler, of Bangor University’s renowned School of Ocean Sciences, with the award of the 2014 Lyell Fund.

This is awarded to researchers in the Earth Sciences to recognize noteworthy research published within ten years after graduation. In work carried out during his PhD and subsequently, Dr Butler has played a major part in the development of the science of shell-ring research, and has co-authored a number of notable papers on the history of marine climate change over the past millennium. He works as part of a team of world leading experts who have been developing sophisticated techniques of measuring and analysing the annual growth rings preserved in the shells of long-lived bivalve molluscs. 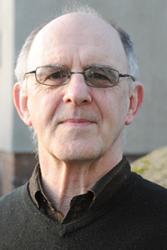 Dr Paul ButlerDr Butler’s work has shown how, by comparing similarities in the patterns of growth in different shells, it is possible to extend these shell archives back many hundreds of years into the past, thus providing a long-term background against which present-day changes in the marine climate can be assessed.  After creating a 500-year archive for Isle of Man waters during his PhD, Dr Butler contributed to a major collaborative investigation of European climate of the past millennium, during which a 1,350-year shell archive was developed for the North Icelandic Shelf; this archive has been used to investigate the history of the north Atlantic currents that are so important for our northwest European climate and is also the basis for ongoing work to build the first annually-resolved 1,000-year marine temperature series.

Paul Butler came to university to begin his undergraduate degree in Ocean Science at Bangor University at the age of 47 after a 25-year career as an IT consultant in London.  He was awarded a First Class Honours degree in 2004 and began his PhD immediately afterwards, gaining his doctorate in 2009.  In 2010, Dr Butler was awarded the Lewis Penny medal by the Quaternary Research Association for his work on the Isle of Man archive.

“It’s immensely gratifying that the Geological Society of London has chosen to recognize our fast-developing but very new approach to the study of past climates. I have been very fortunate to have had the opportunity to work with two of the leading experts in my field, Professor James Scourse and Professor Chris Richardson at the School of Ocean Sciences.  It has been through my association with them, and also my access to the world class facilities at SOS, including our research vessel, the RV Prince Madog, that I have been able to carry out the research that has resulted in this award.”

“This is a very well deserved recognition by his geological peers of Paul’s achievement. It is especially pleasing that Paul has developed his marine science career entirely within Bangor University from undergraduate to research lecturer.”

Paul Butler is currently coordinating a collaborative EU-funded project whose goal is to use shell archives to investigate in detail the history of marine climate of the northeast Atlantic Ocean during the past millennium. This project continues the work of the Bangor team and other leading experts, and will train ten PhD students, based in seven centres across Europe, in the skills associated with shell-ring research.  He is also a Research Lecturer in Sclerochronology and Scleroclimatology, funded through the Climate Change Consortium for Wales (C3W).