These glowing tributes and recommendations come from the nominations for one particular student for the Bangor University’s Peer Support Volunteer of the Year Award.

Professor John G Hughes, Vice-Chancellor, presents Nathan Gibbons with the Award.Nathan Gibbons, who is 20 and comes from Grimsbury in Banbury, Oxon., is the student described, and was awarded the Peer Support Volunteer of the Year Award, which comes with a £50 prize and a plaque, for his sterling work as a Peer Guide. He is studying Clinical and Health Psychology at Bangor University and is a former pupil of Banbury School.

Nathan volunteered to become a Peer Guide, influenced by his own first year experience of the Peer Guide he was assigned to when he began his studies at the University’s School of Psychology.

Nathan said: “I thought that other students deserved the same if not better level of support than my own student experience.”

“Being a Peer guide, I’ve been amazed at how people have flourished and grown within a week of having a bit of support,” he added. 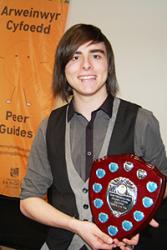 Nathan Gibbons.Nathan described how having volunteered, and being selected, he received training for the role.

The University’s Peer Guiding Scheme helps first year students to settle to University life. The Scheme matches up new students with ‘Peer Guides’, current second and third year students who act as mentors, arranging social activities, showing students around and generally giving advice, from the best place to shop - to signposting where to go in the University for academic or other support. It is one of the largest such schemes in the country and has been developing and expanding for 19 years since the original pilot.

At the end of the year, all the first year students whether undergraduate or postgraduate, are invited to nominate volunteers for the Annual Award. This year, nearly 40 Peer Guides, Postgraduate Ambassadors and Academic Study Leaders were nominated, and Nathan was selected for the Award. The award was made at an event at which all the volunteers are thanked for their valuable contribution to the student life at Bangor University.

Nathan chose to study at Bangor University because he says that: “apart from the fantastic reputation of the School of Psychology, I didn’t want to move to a big city: Bangor is a small city and has everything I need, so I feel more comfortable here.”