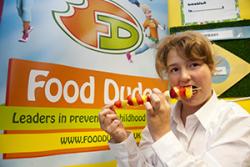 A pupil enjoys a fruit kebab.Denbighshire Council has become the first Council in Wales to pilot the successful and innovative Food Dudes healthy eating programme. The programme was launched in January in two Special Schools, Ysgol Tir Morfa in Rhyl and Ysgol Plas Brondyffryn in Denbigh, where it has been really well received by the staff, parents, and children.

According to the National Assembly for Wales’ figures, the rates of childhood obesity in Wales are the highest in the UK, with about 35 per cent of children under 16 years old overweight or obese in 2011. Out of these, 23 per cent of boys and 16 per cent of girls were classified as obese. Eating a diet rich in fruit and vegetables reduces obesity and offers considerable protection against many illnesses - but getting children to eat healthily is a major challenge.

"Children with intellectual disabilities often show change-resistant behaviours and are reluctant to try new foods. They are more likely to develop health problems and obesity than their peers in mainstream schools, but they have been entirely overlooked in the existing research - until now." 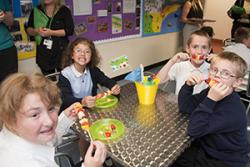 Pupils at Ysgol Tir Morfa enjoying eating healthily.Food Dudes healthy eating programme - an evidence based behaviour change intervention that produces large and long lasting improvements in diets of primary aged children - was modified for use with children with intellectual disabilities, including Autistic Spectrum Disorder. The research team recorded substantial increases in children's consumption of fruit and vegetables and significant decreases in their consumption of sweet and fatty foods in the first school to complete the programme. Positive changes were evident immediately after the intervention and even more prominent at 3-month follow-up, showing that Food Dudes had large and long-lasting effect on children's healthy eating - comparable to the results previously obtained with Primary schools in the UK and Ireland. Similar results are expected in the second school.

"Our results show that Food Dudes Programmes can significantly improve nutrition, reduce health inequalities, and give the children in Special Schools and their families much needed help to establish and sustain healthy lifestyles."

Deputy Head teacher of Ysgol Tir Morfa, Sue Parry added: “At Ysgol Tir Morfa, we are excited to be taking part in the Food Dudes programme. It is a fantastic initiative which encourages healthy eating and prompts children to try a variety of fruit and vegetables which they may not have had the opportunity to try before. It’s really rewarding to see obvious changes in our pupils’ behaviour. One example is that our school café has had to significantly increase its order for fruit due to demand from the children."

"Food Dudes has encouraged our pupils to think about the choices they are making in their diet and we are seeing the impact this is having at home too. We look forward to seeing the impact that the programme will have on our children, contributing towards a healthier lifestyle.”

Theresa Fox-Byrne, whose son attends Tir Morfa, said: “The Food Dudes programme has had such an amazing effect on the way our family eat. My son is so keen to eat more fruit every day for breakfast.”

The programmes are run by Food Dudes Health, a Social Enterprise, and designed to bring about significant and lasting increases in children’s consumption of fruit and vegetables accompanied by big reductions in their consumption of sweet and fatty food. Food Dudes uses rewards based tactics and role-modelling to get across its message and engage with the children. Their stories are based on four hero cartoon characters, Razz, Tom, Charlie and Rocco, who battle with ‘General Junk’ and his Junk Punks, who are out to destroy the health of the world’s children by depriving them of healthy food.

The Food Dudes programmes began as a series of research projects at Bangor University, headed up by Professors Fergus Lowe and Pauline Horne in the School of Psychology. Over seven years, the Food Dudes programme has proven successful in helping to change children’s eating patterns for the better, at a stage in life when food preferences are still developing.

“Obesity is one of the most serious public health issues of our time. It is crucial that we help children tackle this issue from the earliest possible age and make the right choices by eating less sweet and fatty food. We are delighted that Denbighshire Council has come on board to pilot the programme. The evidence indicates that the Food Dudes programme will have a major impact on the eating habits and health of the children in these schools,” said Professor Fergus Lowe, Chairman of Food Dudes Health.