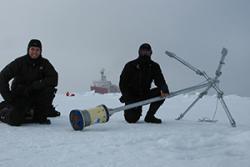 Ocean Physics group members Ben Powell and Ben Lincoln deploying an onceaogrpahic instrument through the ice approx 600 miles from the North Pole last August. Members of the School of Ocean Sciences have just joined a research cruise to the Arctic Ocean.  Research Officers Ben Powell and Ben Lincoln and PhD student Suzie Jackson are all part of the School’s Ocean Physics research group. They will be joined later by Dr Tom Rippeth and another PhD student, Josh Griffiths.

The Bangor team will be taking oceanographic measurements that in an attempt to improve scientists’ understanding of the impact of the reduction of summer Arctic sea ice on ocean currents.

Arctic Sea always melts back in the summer, but last year the sea ice shrank back to 1.3 million square millions, less than half the average value for the past 30 summers. The area of ice which has disappeared is about 160 times the size of Wales.

Team leader Dr Tom Rippeth, who will be joining the cruise in a couple of weeks explains the significance of the decline:

“Over the past few years we have seen a big decrease in the amount of sea ice floating on the Arctic Ocean during the summer. The decrease is particularly pronounced at the end of the polar summer, when the sea ice cover reaches an annual minimum. The minimum recorded in 2012 smashed the previous record set in 2007, and is less than half the average September value for the past 30 years. ”

“The sea ice plays a very important role in climate as it effectively acts as a mirror, reflecting the sun’s rays back into space. It also acts as a cap insulating the Arctic Ocean water from the much colder atmosphere. In the absence of sea ice, the Sun’s rays are absorbed by the dark ocean warming the water, and in turn the open water loses heat to the atmosphere causing it to warm up.  This positive feedback results in an acceleration of the summer sea ice melt.”

“There is now growing evidence to suggest that there is a shift in the climate balance driven by all of the extra heating in the Arctic, and that this shift may be at least in part responsible for the increased number of extreme weather events experienced in recent years. Examples of such extreme weather may includelast  summer’s weather, which was the wettest in over 100 years here in the UK whilst at the same time many regions of the US have been struck by severe drought and heat waves.”

“While the spate of very cold weather experienced in the last few winters over central and northern Europe appears to contradict the global warming trend, there is also evidence to link these extreme weather conditions to the decline in summer sea ice cover in the Arctic”.

The team from Bangor are working with colleagues from Oxford, Southampton and Reading Universities, University College London, the National Oceanography Centre, British Antarctic Survey and Scottish Association for Marine Science on a Natural Environment Research Council Grant to improve understanding of the likely impacts of an Arctic Ocean which is ice free in the summer.