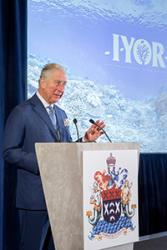 Recently, HRH The Prince of Wales, drew attention to the economic drivers behind coral reef degradation and the investments required to ensure the long-term health of these vital marine habitats.  Professor John Turner and Dr Gareth Williams from the School of Ocean Sciences were among an invited audience of UN envoys, ambassadors, financiers, conservationists and reef managers to raise the urgency of scaling up resilience and recovery of the world’s coral reefs, with a particular focus on the role of the private sector and philanthropy.

The meeting organised by the Prince’s International Sustainability Unit (https://www.pcfisu.org/marine/) for the International Year of the Reef 2018 (https://www.iyor2018.org/) was held in the wonderfully elegant Fishmongers’ Hall on the banks of the River Thames, one of the Twelve Great Livery Companies of the City of London, which houses Annigoni’s famous portrait of H.M. The Queen Elizabeth II.  Prince Harry accompanied his father to lend support to a ‘rallying cry for action’ to stop the decline of the world’s coral reefs.

In his speech (https://www.princeofwales.gov.uk/news-and-diary/the-prince-of-wales-hosts-meeting-discuss-how-organisations-can-work-together-help), HRH The Prince of Wales drew attention to ‘the unimaginable loss of fifty per cent of the world's tropical coral reefs over the past three decades.  More recently, we have seen the most widespread and severe bleaching event on record sweep across the world's coral reefs, leaving behind terrible scenes of destruction.’  The Prince noted ‘As is the case in relation to so many of the ecological challenges before us, the stakes are increasingly high and time very short.’  He identified that ‘we are at a critical tipping point ….where we will either ensure, or fatally compromise, our ability to safeguard the world's coral reefs and the species that will support future generations of humans and countless other forms of life. The Prince recognised that ‘the Ocean has an astonishing ability to heal itself, if given the chance’ and concluded that it is ‘absolutely critical that the scale of the collaboration equals the size of the challenge.’ 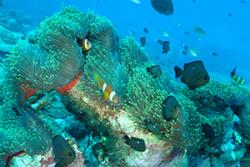 Bangor & partners research in Chagos highlighted: image: ©J.TurnerErik Solheim, Executive Director of United Nations Environment Programme echoed The Prince of Wales, referring to the fact that we are at ‘a critical juncture for the future of the world's coral reefs’.   The UN and World Conservation Monitoring Centre have shown that coral reef ecosystems provide society with living resources and services valued at US$375 billion per year, but that in the last 6 years, only US$1.9 billion was committed to implement, monitor and enforce conservation and sustainable management of coral reefs, mangroves and seagrasses https://coralfunders.com/.

The meeting called for large-scale investment from the private sector through innovative financial solutions such ‘Green Finance’ and philanthropy The meeting heard that Deloitte valued the Australian Great Barrier Reef at A$56 billion with an economic contribution of A$6.4 billion per year due to tourism and its icon status, and that The Great Barrier Foundation recently raised A$70 million towards management from the private sector.

Other significant coral reef systems can also attract significant funding for scientific research underpinning conservation and management, such as the remote Chagos Archipelago in the Indian Ocean. An international consortium of 16 partners including Bangor University, has been awarded US$12 million from the Bertarelli Foundation (https://www.fondation-bertarelli.org) for research and management of the Chagos Archipelago in the British Indian Ocean Territory (BIOT). The reefs are uninhabited and serve as a reference site to study the impact of climate change in the absence of local human impact.

During the Prince’s International Sustainability Unit meeting, research in BIOT by Bangor scientists and partners was highlighted in a presentation by Dr Heather Koldewey, (Head of Marine and Freshwater at the Zoological Society of London and programme management lead, Bertarelli Programme in Marine Science).   The Bertarelli Programme in Marine Science will focus on a series of projects on coral reef resilience and recovery, sentinel species such as turtles, seabirds and sharks; and using science for management, coordinated by the Zoological Society of London. 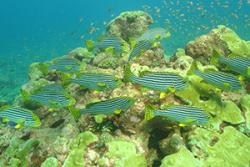 image: ©J.TurnerProfessor John Turner, working with Dr Ronan Roche and Dr Gareth Williams from Bangor, will lead a £2.1m (£999,258 to Bangor) four year project within the Programme on Coral Reef Condition in the Chagos Archipelago, working in collaboration with the universities of Exeter, Oxford and University College London.  John says that ‘collaborations on this scale from  foundations are important in funding research to meet the challenge of preventing reef decline, by understanding reef resilience and management for recovery, and are aligned with The Prince’s International Sustainability Unit’s call for action, and we are grateful to the Bertarelli Foundation for their generous support