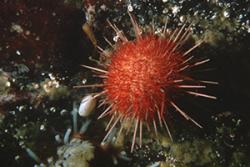 The Southern Ocean species of sea urchin (Sterechinus neumayeri)A study of sea urchins from the Antarctic Peninsula has revealed an ability to adapt to changing conditions such as rising sea temperature and acidification. Writing in the Journal of Animal Ecology the authors set out to answer important and fundamental questions on how life in the ocean will respond to projected changes in the coming decades.

Despite evidence of increasing acidification of the world’s oceans, questions remain over whether marine species will be able to adapt to these changing conditions. This latest study, led by scientists from the British Antarctic Survey and Bangor University, is one of the longest ever conducted.

A total of 288 sea urchins were collected by divers from Ryder Bay off the Antarctic Peninsula and transported to the British Antarctic Survey in Cambridge, UK.  There they were placed in aquarium tanks and monitored over a two year period. The alkaline content of the seawater they were kept in was lowered by between 0.3 and 0.5 pH units and the temperature was raised by +2°C. The conditions were chosen because they align with end of century (2100) predictions for changes in ocean conditions.

All the animals survived, but took between six to eight months to stabilise their physiology after the change (acclimate to the new conditions). There was no significant change in the size or mass of the urchins during the two year period showing the changed conditions did not affect growth rates in the adults. 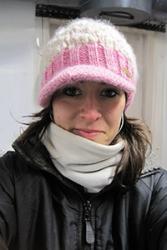 Dr. Coleen Suckling of the School of Ocean Sciences, who led the study.The researchers also set out to discover what effect changes in sea conditions would have on breeding and survivability rates for new born urchins. It takes a long time for this species to develop sexual organs so sperm and eggs were fertilised artificially at six and 17 months. At the six month period, the number of larvae that spawned successfully were significantly lower than when the animals were spawned at 17 months emphasising the need for long-term observations.

“With predictions of warmer, more acidic waters in the future, this work shows how resilient these animals are to climate change. It also emphasizes the importance of conducting long-term experiments in making accurate predictions. These animals live a long time and do everything really slowly. They take around eight months to get used to new conditions and two years to produce gonads (sexual organs). If we had stopped this experiment at three or even six months, we would have got very different results.”

The Southern Ocean species of sea urchin (Sterechinus neumayeri) is highly abundant and plays a crucial role in the benthic ecosystem. It grazes on the detritus of other animals and thus absorbs calcium in the water. Like other Antarctic marine invertebrates, it grows slowly and can live up to 40 years. Because of this, it will not have many breeding cycles to adapt its genetics to new conditions. Any negative impacts from climate change on the species will have further ramifications on the region’s ecosystem.

The Southern Ocean is expected to be the first ocean to become under saturated in calcium carbonate. Therefore any changes in pH and calcium availability for shell and skeleton building are likely to be felt there first.

“In the cold waters of Antarctica metabolism is slowed which means that animals take longer to develop. This also means that that the time it takes for them to mature and reproduce can be many years. So adaptation through generations might not be a reliable strategy to cope with rapid climate change, both processes occurring at almost similar time scales. Instead, if the animals are able to acclimate, then this might help them cope with future changes.”