Solving one of the great mysteries surrounding the moon 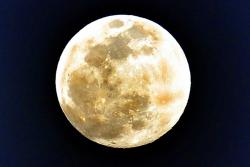 A recent 'supermoon': Jessie Eastland [CC BY-SA 4.0 (https://creativecommons.org/licenses/by-sa/4.0)]Dr Mattias Green of Bangor University, in collaboration with researchers from Royal Holloway, University of London, have netted a research grant worth £520K from the UK Natural Environment Research Council (NERC) to tackle a major question in the understanding of the history of the moon.

50 years ago, on the July 20 1969, the Apollo 11 space mission landed on the surface of the moon, with Neil Armstrong and Buzz Aldrin becoming the first people to set foot on the moon.

In what was one of the greatest achievements of human civilization, they brought back rock samples which showed that the moon was 4.5 billion years old, and so must have formed only 200 million years or so after Earth formed.

The astronauts also left mirrors on the surface of the moon so that lasers could very accurately measure the Earth-moon separation. These laser measurements estimated that the moon is moving away from the Earth at a rate of 3.8 cm/year. However, at this rate the moon could only be 1.5 billion years old, otherwise it would have been torn apart by the Earth’s gravitational field.

These two observations lead to an obvious paradox: the geological age of the moon and the rate at which the moon is moving away from the Earth don’t add up!

Mattias Green of the School of Ocean Sciences, thinks he has the answer:

“The reason the moon is moving away from the Earth is due to the friction associated with the flow of the tides. In effect the tides are dissipating energy, the impact of which is to gradually increase the length of the day (by slowing the Earth’s rotation rate) and to push the moon away from the Earth.”

“Using simulations on state-of-the-art supercomputers we have shown that as the continents move around, in response to continental drift, the global tides change. Consequently, we have been able to identify a 500 million year “super tidal cycle”.  What’s more, over this cycle the level of tidal friction also changes, implying that the rate at which the moon is being pushed away from the Earth has varied and been smaller for long period of Earth’s history.”

“In the new project we will combine new supercomputer simulations of tides, over the past 600 million years of Earth History, with data from bore holes, made by the oil industry, to develop a new history for the rate at which the moon is moving away from the Earth, and so solve the moon-age paradox generated 50 years ago when we first landed on the moon.”