Ten years after the Thames whale, how are Britain’s sea mammals faring?

This article by Peter Evans,  Honorary Senior Lecturer, Bangor University was originally published on The Conversation. Read the original article.

The British Isles are blessed with a wide variety of sea mammals, with records showing 29 species of whales, porpoises and dolphins and seven species of seals in its waters. But only some of these are regular inhabitants, and when the more unusual species make an appearance it can cause considerable public interest – as happened ten years ago when a northern bottlenose whale, normally found in the deep Atlantic, instead swam up the River Thames in front of the Houses of Parliament and tens of thousands of fascinated onlookers.

While few in the city can have been unaware of what was unfolding in the river, attempts to rescue the whale failed, and it died two days later. The whale, far from its normal habitat, had probably entered the North Sea in pursuit of squid, its principal prey, before becoming lost and, hungry and disoriented, ended up in the Thames Estuary. A post-mortem by pathologists from the Zoological Society of London found the cause of death to be a combination of dehydration, physiological stress, cardiovascular collapse and multiple organ failure induced by the stress of repeated strandings and the attempted rescue.

In truth, the tale of the Thames whale says more about human behaviour than whales themselves. But a decade on, it’s interesting to reflect on what we know about the changing fortunes of the remarkable creatures that live in Britain’s waters. 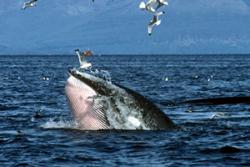 Minke whale lunging through a large shoal of sprat in the Inner Hebrides.: Photo: Peter EvansOf the 29 cetacean species recorded around Britain, 15 are regular inhabitants. But we know very little about all but the most common species. Some species such as fin and humpback whales, among the principal targets of the early 20th century whaling industry, show signs of recovery, with a marked increase in sightings.

Minke whales, which are still taken in Norwegian waters but in smaller numbers, also show signs of population growth since the 1980s. This may be related partly to ecosystem changes during the 1960s-70s when fish stocks of herring and mackerel collapsed, seemingly taking the pressure off prey fish such as

sandeel and sprat for which the whales competed. However, since the mid-1990s, the abundance of minke whales as assessed by large-scale surveys (SCANS in July 1994 and SCANS II in July 2005) has shown no significant change.

During the 1990s, deaths of porpoises from accidental capture in fishing gear such as gill nets were thought to be unsustainable, which led to the introduction in 2004 of an EU Regulation (812/2004) aimed at reducing bycatch. At the same time, fishing in the North and Celtic Seas where porpoise bycatch was greatest also declined. However, porpoise deaths from fishing vessels continue, with insufficient monitoring for us to be truly confident of the scale.

Another problem facing marine mammals is that of pollutants: contaminant levels in top predators, which bioaccumulate through the food chain, have declined substantially from when PCBs (polychlorinated biphenyls) and pesticides (DDT and dieldrin) were widespread during the mid-20th century. But they persist in the oceans, with PCB levels in particular around the UK linked with disease among harbour porpoises. Other top predators like bottlenose dolphin and orca (killer whale) may also be especially vulnerable. That said, there is no clear evidence of significant overall population declines. 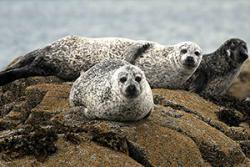 Harbour seals have been declining in several areas of Britain. : Photo: Peter EvansWe know much more about seal populations than whales, thanks mainly to the monitoring efforts of the Sea Mammal Research Unit at the University of St Andrews. With an estimated population size of around 112,000, the UK accounts for 38% of the world’s Atlantic grey seals, which appear to be thriving. The majority (88%) breed in Scotland where, since the 1990s, they have been growing in numbers, particularly around Orkney and parts of the North Sea. Only in the Hebrides have pup birth rates remained fairly static.

By contrast, harbour seals have not fared so well over the same period. At 36,500, Britain’s harbour seals represent around 30% of the European population. Harbour seal counts (made during the autumn moult) were stable or rising until around 2000 when they began to decline in Shetland (down by 30%), Orkney (down 78%) and the Firth of Tay (down 93%). Other regions have been more stable, with those further south recovering from the devastating effect of the PDV morbillivirus epidemic in 1988 which wiped out more than half their population. We don’t really know what’s behind these changes, but competition for food and the impact of toxins from harmful algae are possible causes.

The effects of climate change on sea mammals is also an issue, due to the effects it has on prey species. The last ten years have seen greater numbers of warm water species such as striped dolphin and Cuvier’s beaked whale, and a new species, dwarf sperm whale, added to those species appearing in British waters. Also, in what might seem like a contradictory trend, a bowhead whale, normally closely associated with the Arctic, made its first UK appearance off the Isles of Scilly in February 2015. It’s likely that the next ten years will bring more changes to the status and distribution of different species as they experience changing environmental pressures.