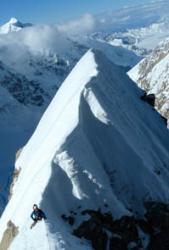 Tom Ripley on the Japanese CouloirTwo Bangor University students could be the youngest pair ever to climb the classic Cassin Ridge on Denali’s South Face in Alaska.

Tom Livingstone, 21, from near Southampton is studying Sports Science with Outdoor Activities and Tom Ripley, 22, from the Lake District, is studying marketing at the Bangor Business School, have returned triumphant from a 5 week expedition to the Central Alaska Range.

The pair started their trip with warm up climbs around the Kahiltna Glacier, a 36-mile long glacier, which lies just under the plateau that houses the 14,000 foot camp (14k Camp). After sitting out a period of bad weather, they climbed Denali by the West Buttress to get fully acclimatized. When a fair weather window of opportunity presented itself, they climbed from 14k Camp to the 20,320 foot summit and back in a very long and tiring day.

“After the West Buttress, we were both quite tired so we wasted two days of perfect weather recovering. On the 22 June we teamed up with Nick Bullock and Andy Houseman and descended the Wickware Ramp to the base of the Cassin Ridge. The ramp is heavily crevassed and towards its end is constantly threatened by massive falling blocks of ice. 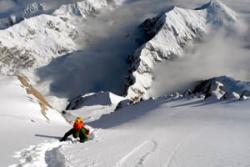 Tom Livingstone climbing towards the summit.“At 6am the next day, we started climbing the Japanese Colouir, and climbed for 20 hours to near the top of the Second Rock Band. The climbing was excellent and mainly straightforward, but there were a few tricky parts along the way. After 20 hours on the go, we camped the night on a tiny ledge at an altitude of around 16,500 feet. The next morning we woke to snow at 7am. After two challenging pitches, we were at the top of the Second Rock Band, the end of the technical climbing, but with 3,600 feet remaining, the route was far from over.

“The weather was still bad and we were both nervous about what lay ahead. Thankfully, whilst we were sat melting snow, the skies cleared and were able to continue in fine weather. We took it in turns to lead, each breaking trail for an exhausting hour at a time. Eventually we topped out on Kahiltna Horn. We dropped our sacks and plodded to the final few hundred feet to the top, summiting at 11pm. 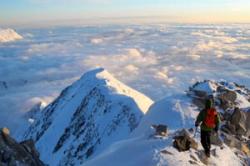 Tom Livingstone descending the West Buttress at sunset after an acclimatisation ascent“We were both very tired by this point, but we made our decent to the sanctuary of 17k Camp, where we collapsed into the relative safety of our tent.”

Both Toms are experienced mountaineers and started climbing at a young age. They have climbed extensively through the UK, Europe and beyond and after graduating next year, they intend to continue climbing as much as possible, in north Wales and around the world.

Tom Livingstone and Tom Ripley are indebted to the following organisations, without their support the expedition would not have taken place.

You can also read more about their adventures on their blogs: